In Part 1, we discovered that the emotional factor of user experience is more important to games than goal-oriented functionality (though being an effective and efficient way of reaching a goal, there is no “Save the Princess” button in a Mario game at the beginning). Up to a certain degree, well-designed user experiences can distract from negative and/or not fixable interaction flaws and can make users “like” an application more than another.

Furthermore the diverse team composition of game development studios was discussed in the first part. In this context we pointed out that the production process of games forces programmers and visual designers to work closely together. Design is not seen as an add-on but as an essential part, which is necessary for the product to work.

The last chapter focused on the aspect of small budgets in game projects. Rapid iterative testing and evaluation (RITE) helps to detect and fix flaws of a UI in a very fast way, thus reducing time and money spent on traditional usability optimization.

In Part 2 we will look at the aspects of imaginary worlds and the link between reality and simulation. Thereafter, we will show which techniques are used in games to reduce loading, and even more important, waiting times. In the last section we compare how serious applications and games introduce their functionality to the user. To get a better understanding of the concept of Gamification you can also read: “Gamification as a design process” by my colleague Jörg Niesenhaus.

Games always work as a closed system. In the early years, this system was mostly reduced to one static screen or “playing field”. As technology advanced, this system got larger and larger. Starting with a fixed black background for Pong, the “playing field” has grown into another form of virtual world (Ultima Online, World of Warcraft, Grand Theft Auto). 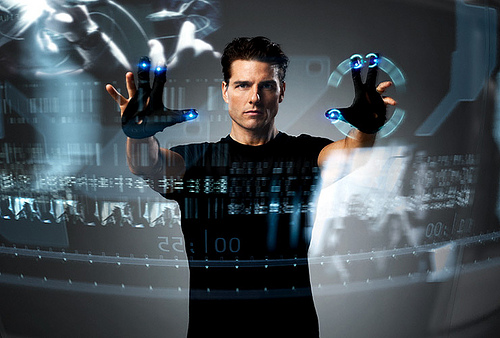 New technology tries to combine virtual and real worlds. Augmented reality (AR) is probably the best known example for this aggregation. In most cases AR superimposes video data with images. Through motion tracking these images get perspectively integrated in the video, creating one image which combines real time video footage with artificial 2D or 3D content.

AR is often used in movies and games as a presentation of futuristic interfaces. In movies they just serve the purpose of looking impressive but in games they have to be usable as well. Current mobile-devices (Nintendo 3DS, Smartphones, Tablets etc.) are capable to use AR to enhance the user experience in many ways. The game AR Defender is a good example for that. The game uses the real world environment as playing field. Through the device’s camera and AR, all game objects are projected into the video stream, which is recorded by the camera in real time. It makes the game feel more realistic in terms of the spatial navigation through the device itself and the integration of real world objects, thus enhancing the gaming experience.

AR interfaces are used as in-game-interfaces as well. The game Dead Space uses a simulated AR interface instead of the typical HUD (Heads Up Display). The interface is integrated to 100% within the game world which makes the game far more immersive. 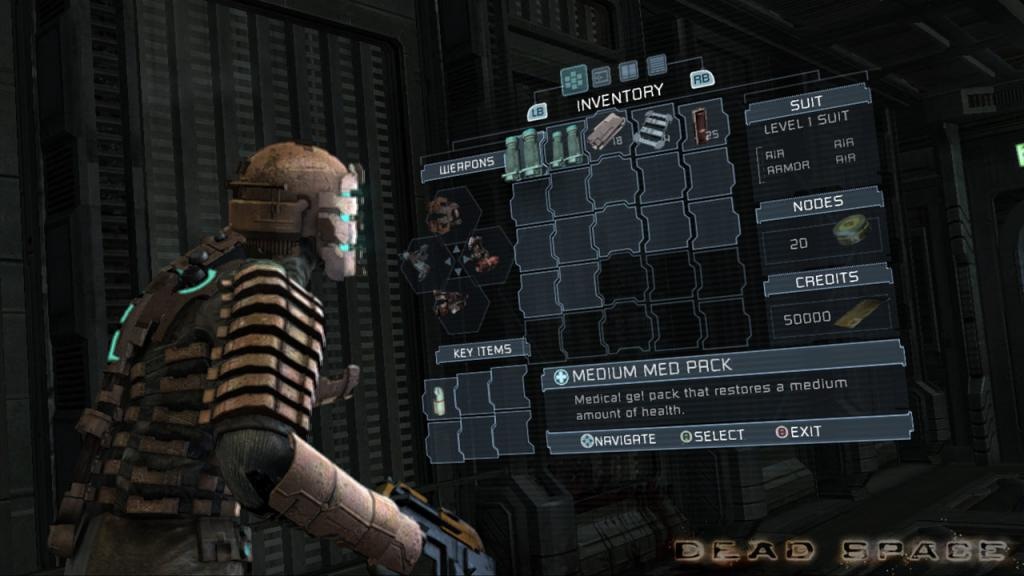 Manufacturing industries can benefit from this technology as well. Since AR is a relatively new technology, which requires a certain amount of calculation power, it is not used in many industries yet. An example for successful AR integration is the production of the Kuka Robot Group, which uses AR technology for planning their factory floors, machinery placement and error correction.

It can also greatly enhance the support for assembling and repairing complex devices or vehicles, such as cars or helicopters. Through mobile devices workers can simulate parts that need to be integrated and assembled. This technology is able to improve many major tasks and even untrained workers can solve a lot more problems in less time.
https://youtu.be/3e71CEQ-yFA
The possibilities for this kind of UI can be taken a step further. If we imagine that it works without tablets or other handheld devices, but “hands free” with a future generation of smart glasses (e.g. Google Glass) and the like, futuristic user interfaces we know from games and movies could become a common help in modern manufacturing and automation industry.

A couple of years ago it was completely normal for an application to load a couple of minutes before starting, which was often extremely frustrating for the user. It was even more frustrating in games since it massively interrupted the user flow every time a new level or screen was loading. Newer games tried to get rid of these loading times. For instance, the next level can be preloaded during the level the player is currently mastering or while a video cutscene is playing. 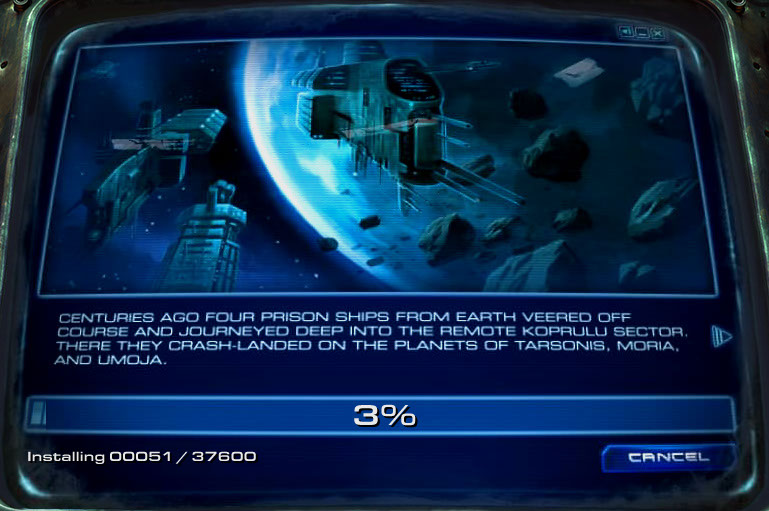 A great example for concealing loading times is the “opening door sequence” in the earlier Resident Evil games. Every time the player entered a new room a short sequence of an opening door was shown, rising tension and anguish and making the game more frightening just through its loading sequence.

Unfortunately, serious applications cannot really shine in this subject. A lot of Web/Phone/Tablet- Apps (games included) use their loading process to show advertisements. This doesn’t enhance user experience at all, but it can be a way to finance an applications. The time is not completely wasted and usually users accept this kind of monetization if they don’t have to pay for the product. But very often, serious applications don’t even show the loading progress, leaving the user wondering if the program has crashed.

Software would be more effective and enjoyable, if designers or developers used downtimes more efficiently. Even if the loading process takes a couple of seconds longer, because a video tutorial has to be loaded to span the actual loading process, it keeps users in the flow and if users can actually work productively during this time, it isn’t even a loss of working time. It is not always necessary to reduce the actual loading time, but if the user has the feeling that loading doesn’t waste his time, he will accept delays to a certain degree. And after all, it is the “perceived performance” that matters, not the actual one.

Most of the time, no one likes to read a manual, take a seminar or do a tutorial. Sometimes it can’t be avoided but other times it is just the lack of the right usability decisions. Many current games show that it is possible to design an interactive system which can be mastered without any additional help by a manual, help files or even seminars. If it is done correctly, players don’t even notice that they are in a tutorial level or that the application helps him to understand its functionality.

Games like Splinter Cell Conviction or Stealth Bastard use the game environment to explain game mechanics or tasks the player needs to accomplish. 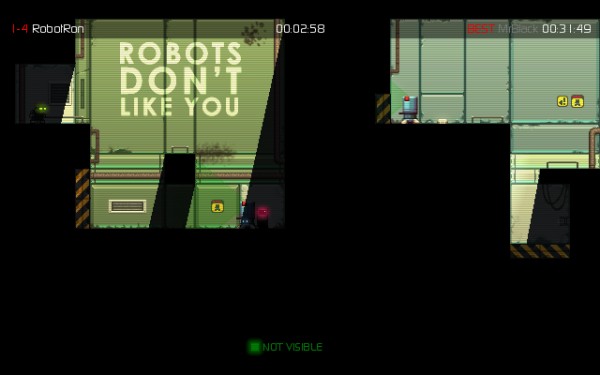 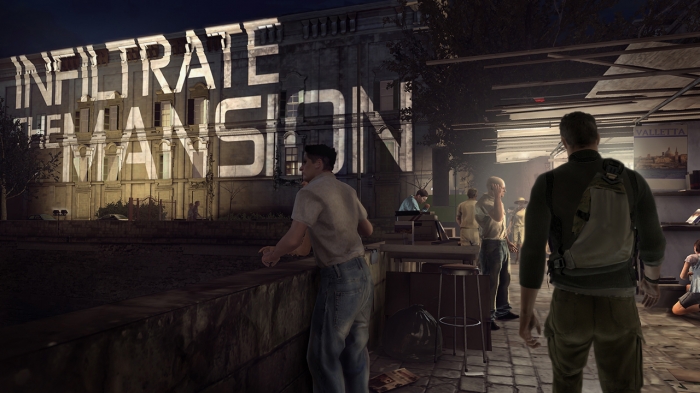 The integration of this technique is fairly simple but the accomplishment is extremely valuable. If it’s done right, it keeps the player completely in flow and it doesn’t force itself onto the player. It is easy to understand and can be integrated perfectly in the environment of the application.

A good “serious” example for that is Wiso Steuersoftware, an application for annual tax declaration. Wiso takes the user step by step through all the tax forms and shows an easy to understand text and video explanation for nearly everything, if the user wishes to. 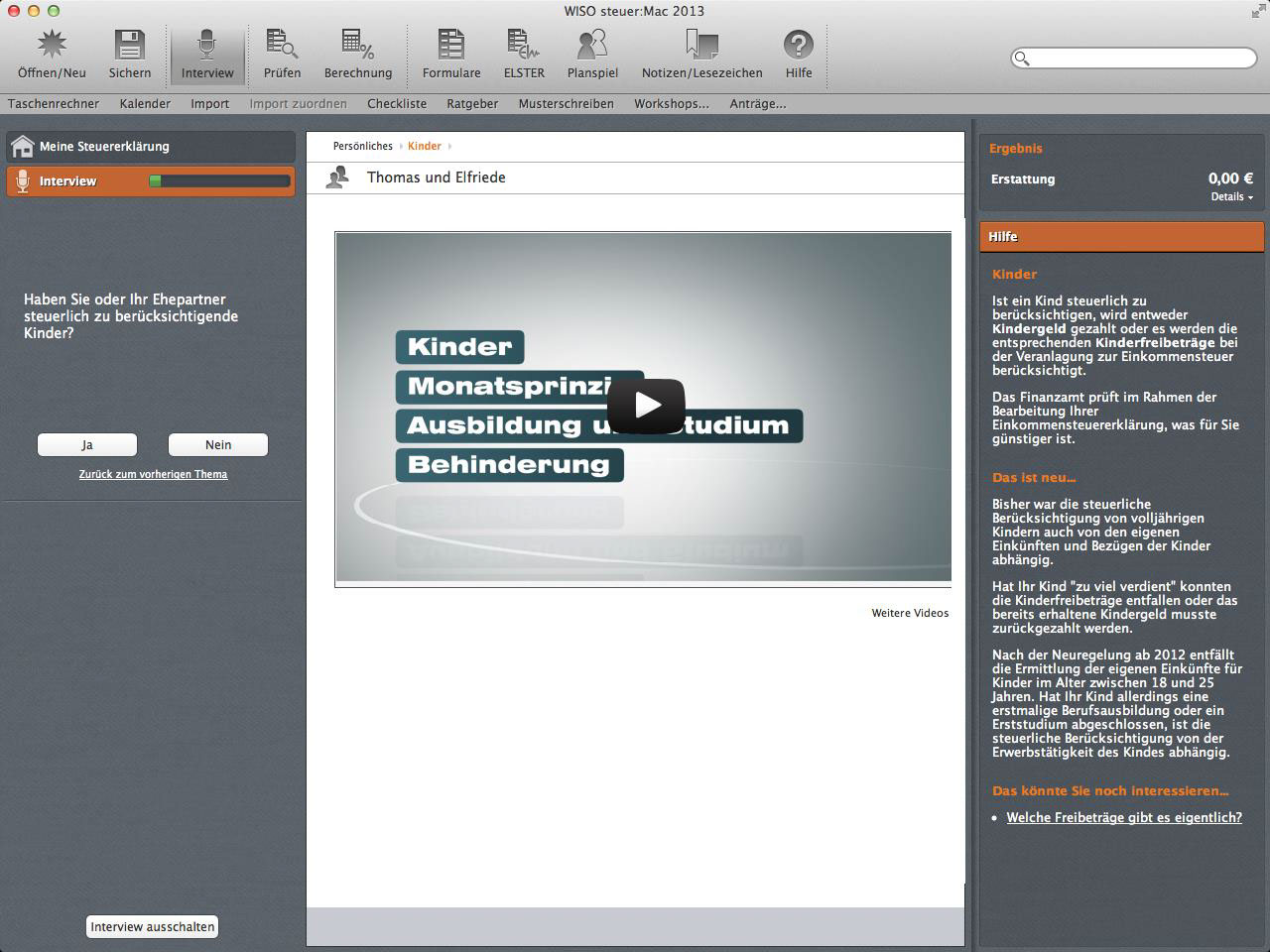 Progressive disclosure is another technique that makes applications in general much easier to understand than most serious applications. It is applied in games mainly through function reduction. Games usually introduce functionality progressively to the player and afterwards test if each step was well understood. Again, Starcraft (being relatively feature-heavy) is a good example. The game would not be enjoyable for players who are new to the series if they would have to start the first level with every feature the game has to offer. The game only shows all its functionality in the last couple of levels, after the player has proven that he understood each feature. Also the complexity and possibility of these functions gradually increases as the player progresses in the course of the game.

Unfortunately, most serious applications take none of that into account. Most of the time, users get every available feature thrown right at their faces, which makes it unnecessarily hard for them to learn a new program. The 3D graphic application Maya by Autodesk has traumatized many graphic designers who wanted to learn it. 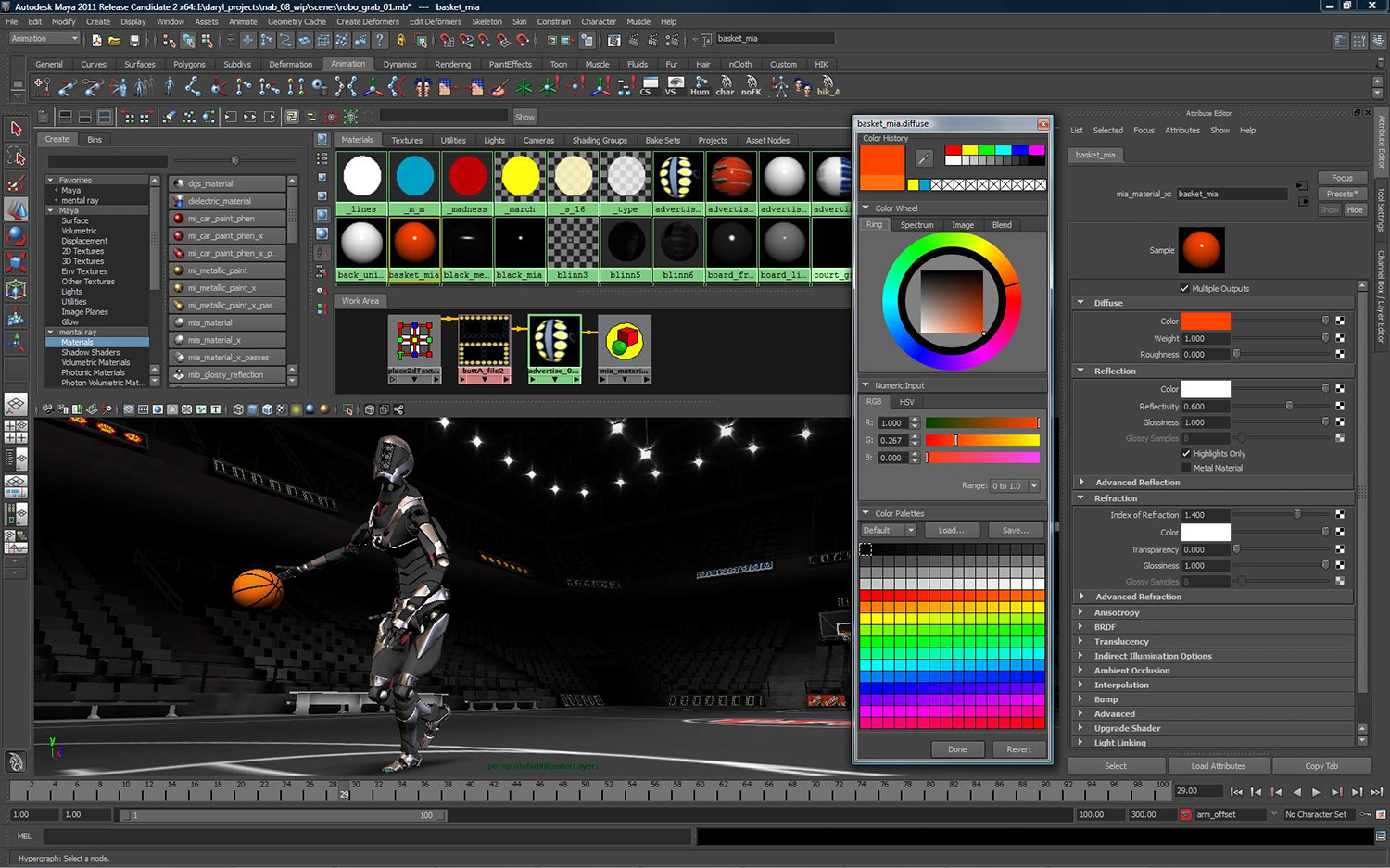 Being a professional tool, aiming at power users, it needs to be that complex because users have to fulfill complex tasks which require a wide range of functionality. But the main problem is that it shows all the complete functionality to everyone right from the beginning. And certainly no one needs all this functionality, especially not all at the same time. For example, a 3D modeling artist has complete different needs than a lighting or animation artist.

The opposite of this example is a serious game called Foldit. The goal of it is to let a large internet community solve real problems (crowdsourcing) for science. Users can fold 3D representations of Amino acids to create new proteins, helping scientific research to develop new medication for instance. Computer algorithms can solve these problems too but the calculation power which is needed is far too high. In 2008 the community had accomplished a tremendous breakthrough for HIV research. With Foldit, they solved the problem in 10 days which couldn’t be resolved by scientists and computer calculation in over 10 years.

Being more successful in terms of combining virtual and real worlds is something where manufacturing or automation industries have a great interest in and where research and development has started to bear fruit. Also, reduction of complexity and progressive disclosure seems to be a point of interest but it is still a long way to reach the point current games have already reached. Finally, bridging loading times and keeping the users in the flow, even if they have to wait for their main tasks is a point where games definitely outperform serious software development.