3D Printing Experiences: A Handle for a Novint Falcon Controller 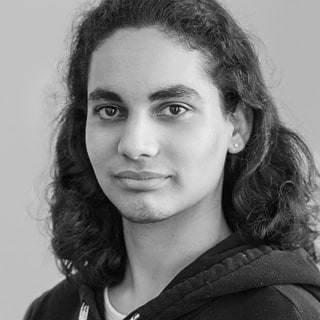 When I first heard of Centigrade in 2015, I was looking for a design company where I could complete my internship for school. The internship was successful and since then I have been working at Centigrade as an Assistant User Interface Designer. Besides working in many visual and conceptual design projects, I could gather first experiences for Centigrade in the field of 3D printing.

My task was to design a handle for the Novint Falcon Controller, a device which translates our hand movements into inputs, e.g. within a VR simulation. This allows us to create a very authentic experience in VR games. 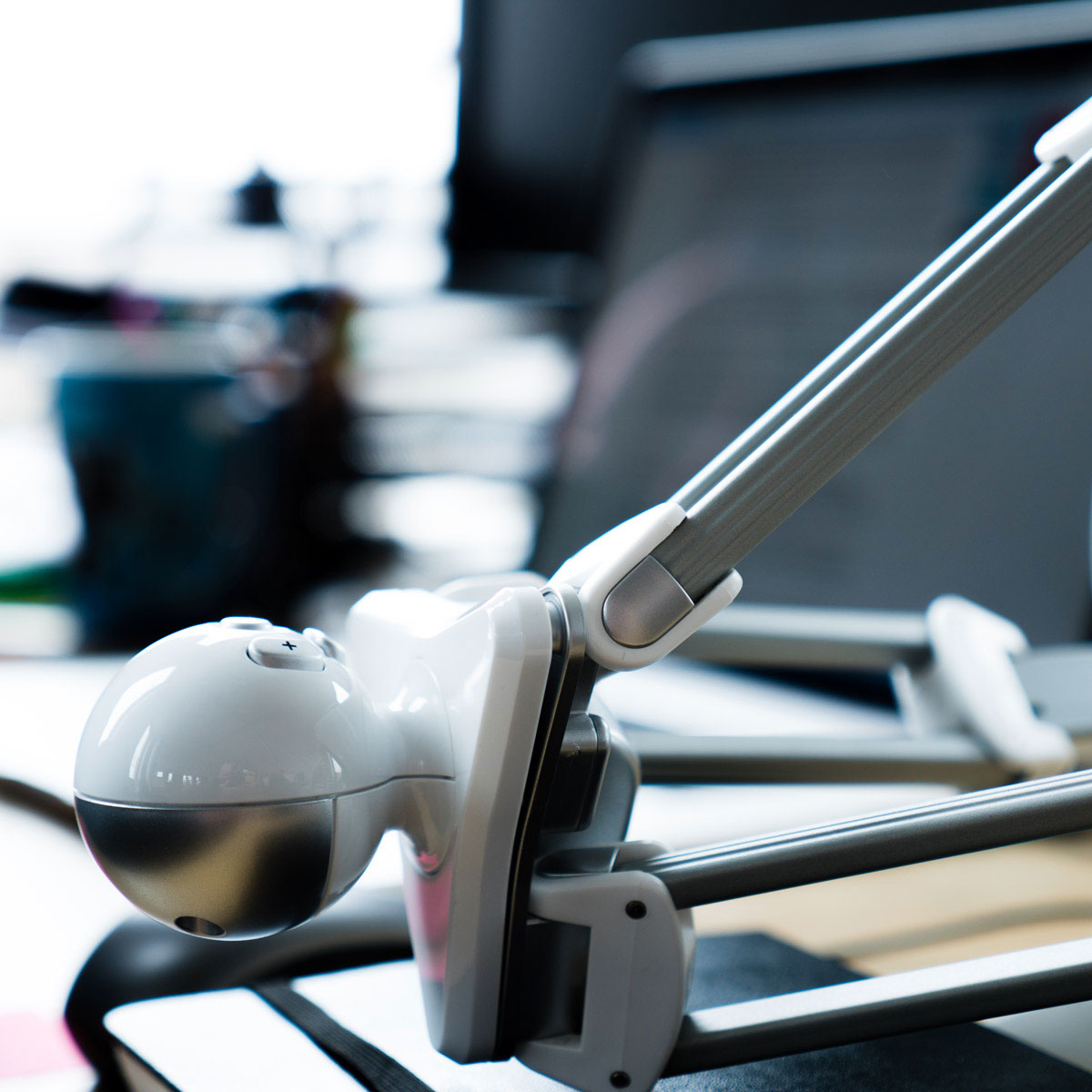 In this case it is not a game software but a project in which Centigrade managed to connect a Virtual Reality (VR) simulation, which is normally only visually accessible, with a haptic feedback.In VR applications, the way users can interact with the virtual world is empirically important. At the beginning, there is the expectation to be able to interact with the virtual objects as naturally as with their “real” counterparts. Some technologies like the HTC Vive are shipped with controllers which users can hold in their hands but there are also other possibilities of interaction with objects in virtual reality. You can find details about this project blog article from august 2015.

For DeepGrip, we used the Novint Falcon Controller. We knew the way the grip feels and how it is designed would have a big impact on the user experience.

The first “quick and dirty” version of the grip was lovingly hand-crafted from wood and one half of a toilet paper holder but as well outdated, especially because there are new possibilities with 3D printing.

After I collected the first ideas and created sketches, we decided to go with a LowPoly design version of the grip. 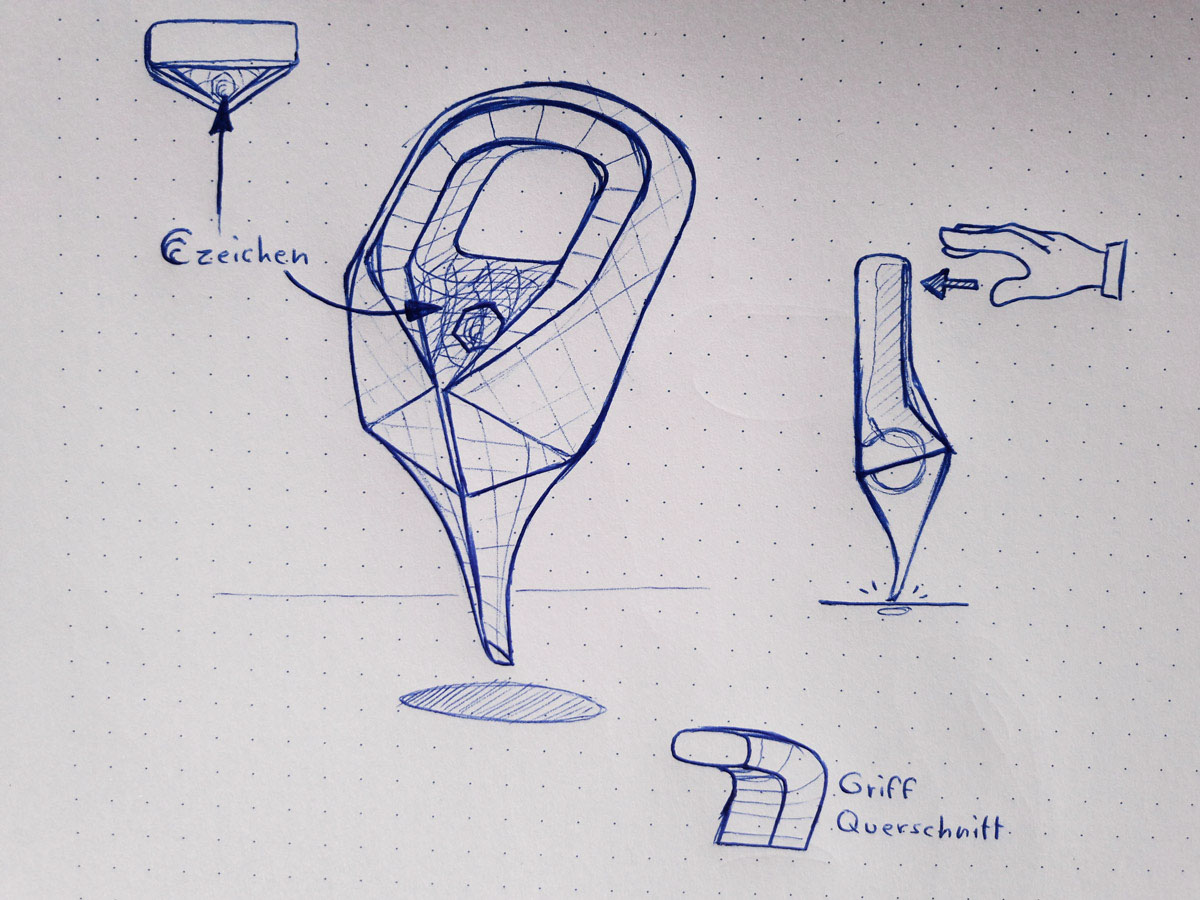 Before I moved on to create the final model, I decided to make a fast, rough concept model without much detail or exact measurements first to have an idea of the final product. This proved to be a good idea because the design stood in heavy contrast with the FalconGrip. We decided to dismiss the LowPoly look in favor of a more smooth and curved design we found in the first sketches.

The most time consuming part of the project was the design of a 3D model within a couple of hours at the PC. Then the design was finished. I used the freeware program Blender, probably the most common 3D design software out there. I already worked with it before, although I am not an expert. This was not an issue since it is not necessary to be an expert in Blender for the task on hand. Blender is a pretty complex and versatile program but the basics for static 3D Models in Blender are quite easy to learn. If you want to dive more deeply into Blender and create wholesome animations or even games, it gets more complicated. 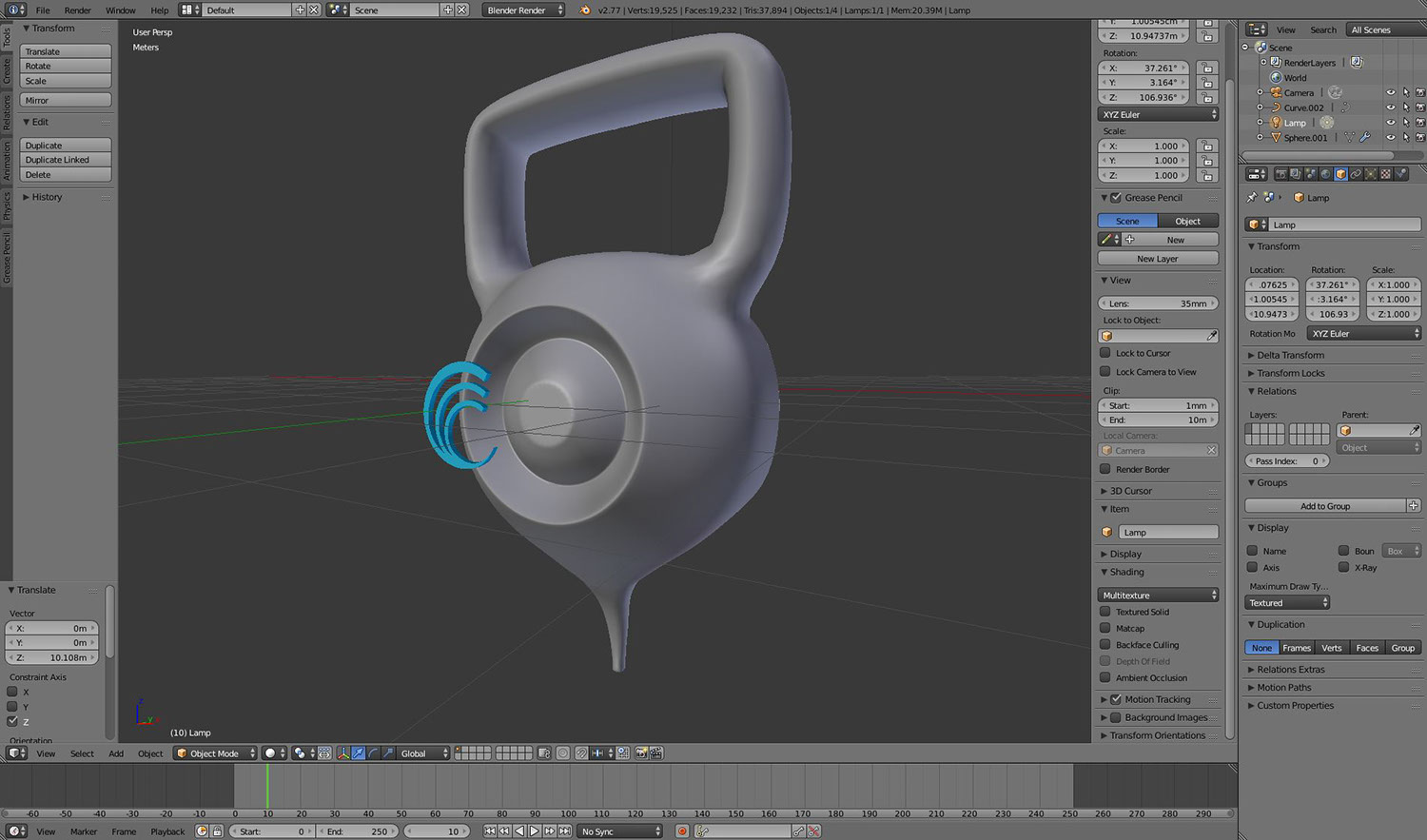 Although Blender’s possibilities are very versatile, some of the tools are bad, unfortunately. For example the measure tool, which was necessary to use in this project. We had to stick to exact measurement so the print would fit the device perfectly but the handling of the tool was very impractical to use.

With the help from some workmates this was not a big obstacle and after around 16 hours the model was ready to be printed.

Two weeks after we had chosen a 3D printing-service and decided on one of the many printing materials, we could hold the grip in our hands for the first time. The first enthusiasm was gone quickly, after we realized that the grip does not fit the Falcon. In spite of the exact measuring, there were inaccuracies during printing. So I took the nearest grinding machine and adjusted the print until it fit the device. 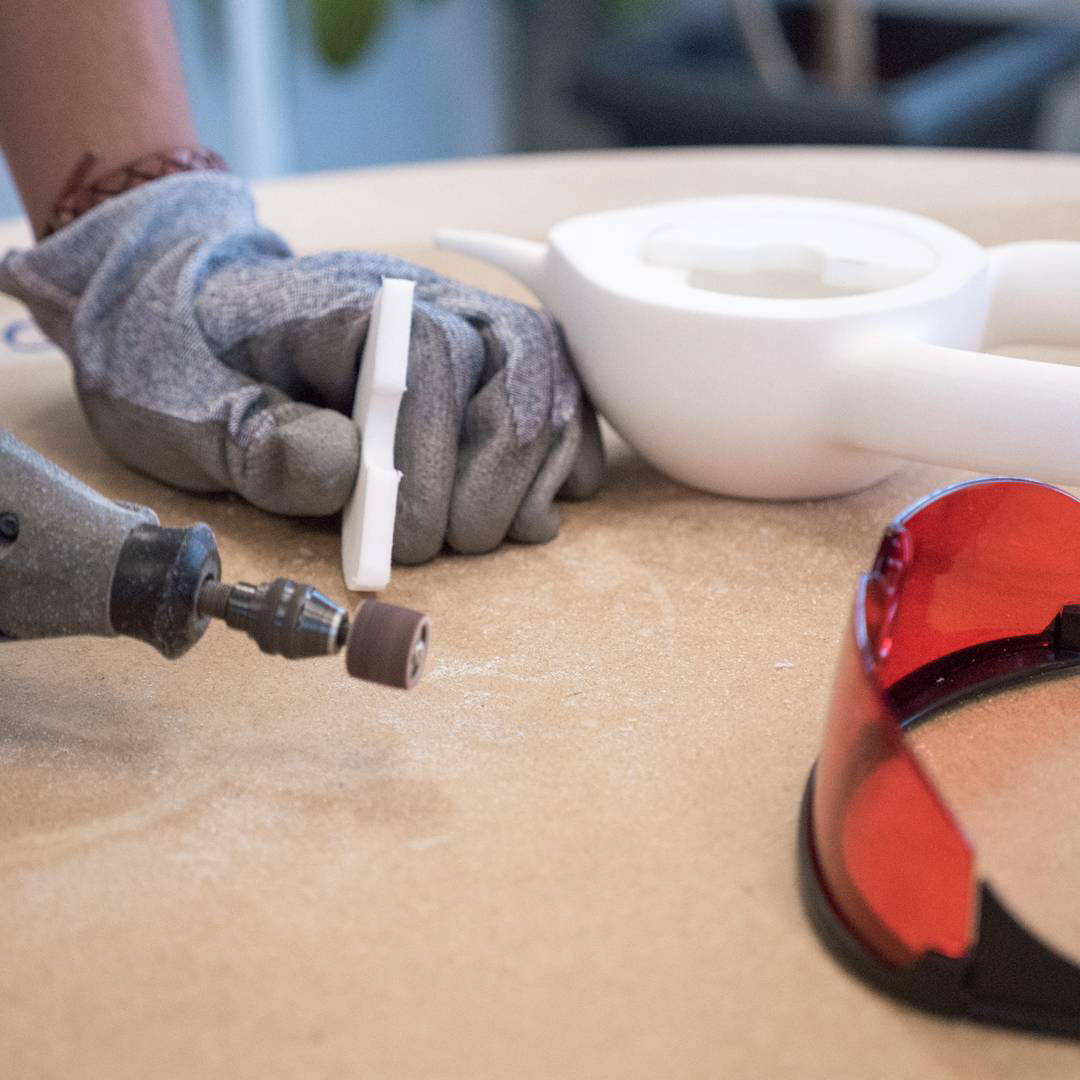 Our takeaway for upcoming 3D printing projects: Designing the objects a little to big is better than designing it to small, because excess material can be ground off!

In the end I went over the grip with a Montana can so the color would also fit the Falcon. That is how the first 3D print in the history of Centigrade was created. 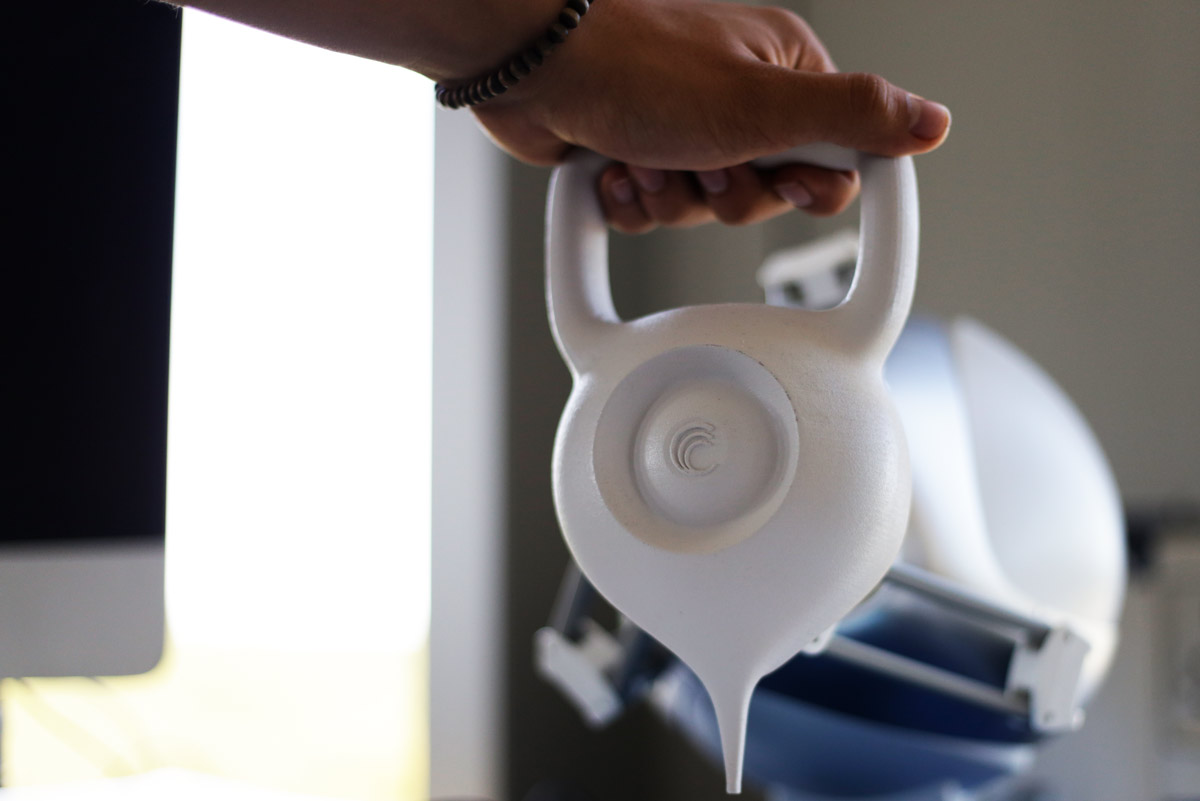