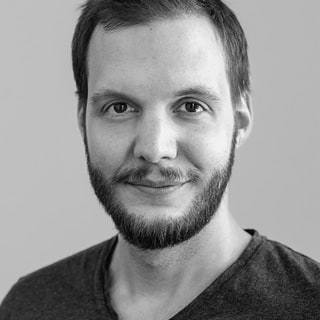 In the first part of this two part series my colleague Simon Kieke drew a bold conclusion regarding the importance of IoT for medium-sized enterprises. Instead of adapting an “all or nothing” mentality, he suggested to integrate small and user-centered digital services into already existing products. This way, IoT products are created with reduced risk and guaranteed benefit for the targeted user group.

This approach is based on the “Lean UX” framework and its core idea of working with Minimum Viable Products (MVP). But how do you define an MVP and how can other Lean Principles further reduce risk and complexity during the project?

In this second part I want to illustrate different Lean Principles with a project rooted in product design & development. The project team consisted of computer science students without design background who participated in my lecture “Designing the User Experience for Ubiquitous Computing Devices” at Saarland University.

The main stage of our story is a restaurant kitchen. This context was chosen freely by the students as part of their imaginary start up. 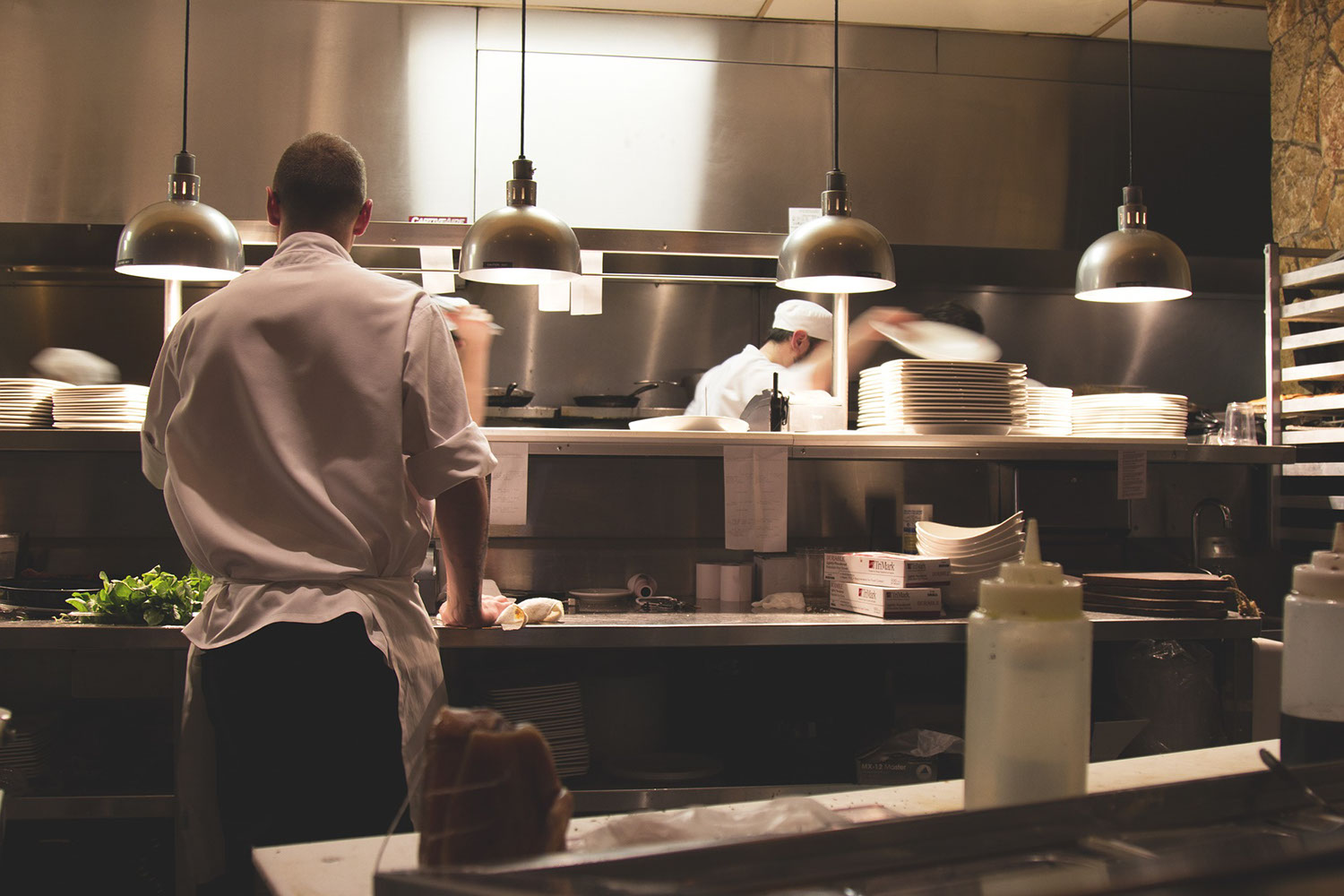 Context of our fictional start up (Source: https://pixabay.com/de/küche-arbeit-restaurant-kochen-731351/)

Our protagonist is a cook working in said kitchen. Or to specify more clearly, he is a cook who is tasked with preparing mouthwatering steaks. The goal of the fictional venture was to reduce mistakes when cooking several meat dishes at the same time.

To center our approach on the user, we created a persona, a prototypical user representing the target group: Kennedy Lemeux, 30 years old, recently married. His corresponding scenario, a day in his life, starts rather excitingly. His wife shares a very big surprise: She is pregnant! Hence while at work Kennedy is a bit distracted …

This unfortunately creates some problems, as today is a busy day and he has to prepare many dishes at the same time. As usual, this includes steaks which he needs to supervise accordingly. Dreaming of his new-found family bliss he forgets about a steak he was pan-frying – very much to the annoyance of his boss. Bummer – it could have been the perfect day for Kennedy.

There are certainly a handful of professional kitchen systems which among other things would have offered an integrated solution for this specific problem. But there is no such system in Kennedys’ kitchen. And maybe there is an easier, a smaller solution to this problem. An MVP, so to speak.

It’s not easy to focus solely on an MVP throughout the project. For this reason, I recommend defining the MVP short and to the point: in a single sentence. For this sentence, we at Centigrade coined the term MVP Statement. In this project, the MVP Statement would be:

“With the release of the product in the end of August 2017, the sous-chef Kennedy Lemeux will be reminded when a steak needs this attention to avoid spoiling one of the many steaks which he is cooking simultaneously.”

This is a comprehensible human need whose resolution would spare a lot of frustration for the persona. The uncertainty of still foreign domains and the complexity of IoT projects are countered by employing a focused and user-centered project goal.

The growing collective knowledge in a project must be available to all team members in a quick and easy way. In the early stages of a project this is mainly about the context, the user and his usual work days. Work results such as persona, scenario in prose or as a comic, and an MVP Statement help to summarize them in a standardized and concise manner. These design methods help the team over the course of the entire project to stay informed and on track. Off we go!

User research can be extensively and time-consuming. But our project is “lean” and supposed to stay lean throughout the product development. Rather than looking into a broad range of user scenarios we want to focus on the one at hand. We want to explore the most critical questions in our scenario, which we explicitly phrase as assumptions. Eliminating those uncertainties with user research is invaluable to our project as I want to illustrate here.

Before making something a must-have requirement, its value for the persona must be proven. Only then resources should be spent to implement this requirement. Even a very experienced team will never know everything about a persona and its workflow. A product built on wrong, untested or even unknowing assumptions may very well be unusable or at least will not fit your persona’s workaday life.

We explore assumptions by the means of user research.

The term “Minimum Viable Research” may be a neologism. Looking at lean principles however, it seems to be semantically overdue. In our seminar, we were very lucky as one of the participants had a cook in his circle of friends. The insights from a short phone call had a strong impact on the course of the project and uncovered design ideas which would have never been discussed otherwise.

Of course, one can’t expect that a team member knows someone from the target audience. You can still be pragmatic though. The purpose of user research is to find unknown stumbling blocks – before stumbling. There are other unconventional methods to name a few:

Lean principle: Get out of the Building

While all those methods may be employed from the comfort of the workplace, the significance of on-site visits cannot be overstated. Again, there is no reason to be dogmatic; these visits are not always possible. Small successes by employing the above methods will however help to provide the necessary arguments for getting out of the building, while also involving the user early on. At the very least they help to build up empathy. 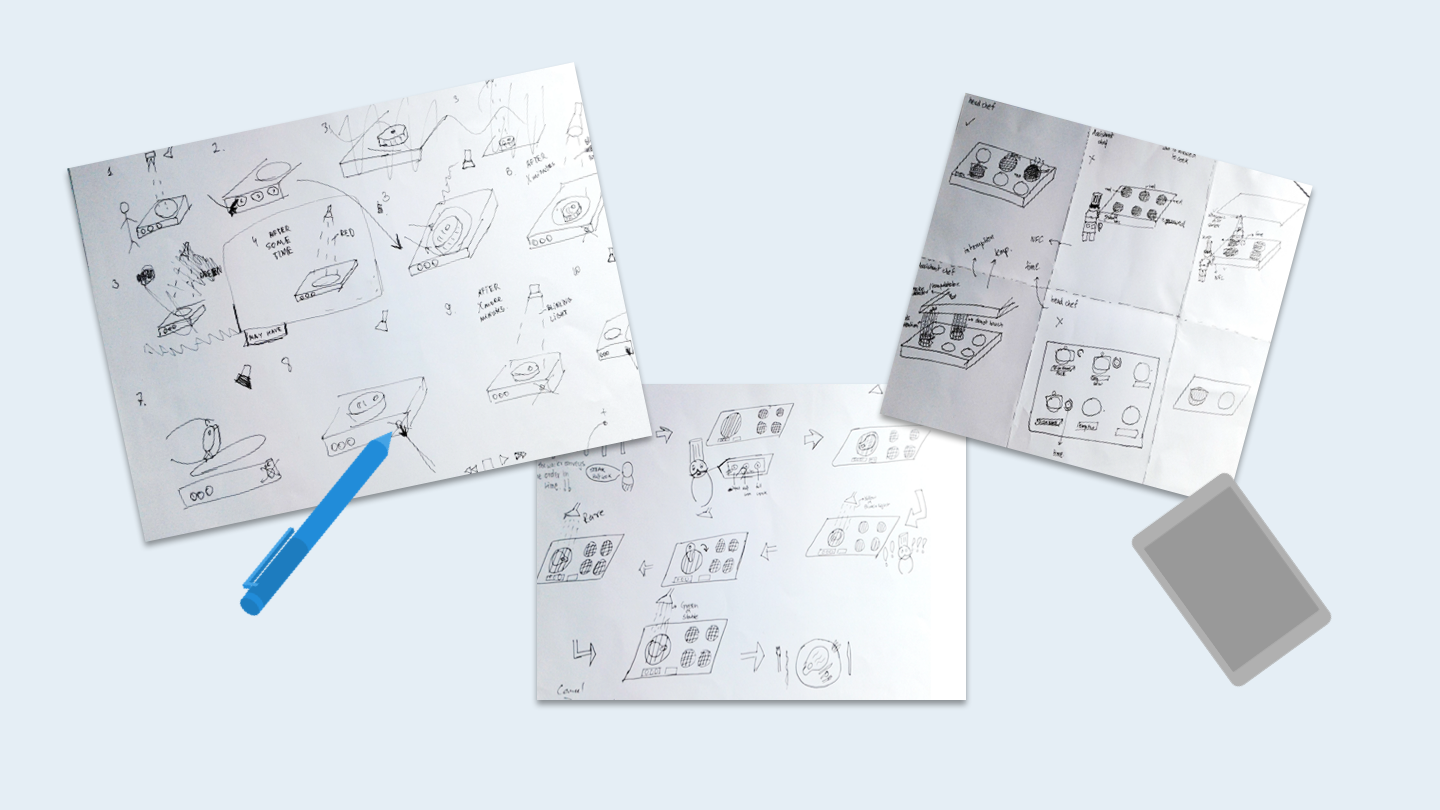 Scribbles from our design studio

Building on our findings we can now proceed to storm ideas. For less experienced teams, I recommend a method called “design studio” which produces many ideas in a short time while involving the entire team.

The pairing of persona and user need creates the perfect restriction to focus our creativity. First off, every participant will generate her own ideas. After a certain time, everyone quickly presents each of their ideas, getting feedback from all others. Afterwards the team continues with a second round of individual brainstorming. Using the feedback and the ideas of others, the interaction in the creative process is structured efficiently. The final ideas can be rated with stickers or other markers. The highest-ranking ideas will enter the next phase.

Our idea of the “kitchen bell” was born in this manner. A hands-free timer for professional kitchens to swiftly set the cooking time for each steak.

Interesting side note: with a focused and well-defined problem space, the solution often suggests itself and appears obvious and unparalleled for all members of the team.

Working in interdisciplinary teams is a given in IoT projects. Software, hardware, and services have to be combined into a singular and coherent product. In order to avoid knowledge gaps the entire team should take part in the initial idea-storming, in contrast to “hero-based design”. Creative methods that endorse collaboration such as design studio are suited to bringing non-designers into the creation process. Such activities also guarantee that all ideas are treated equally during the early stages of brainstorming. This will broaden the spread of ideas and strengthen identification of all team members with the product. As always: a united team and fast-paced collaboration are key to efficient project management.

Another popular term when talking about Lean Principles is of course Rapid Prototyping. This approach however is only feasible if the respective idea is small enough that it can be implemented as a prototype with little time and effort. Without a well-defined MVP, this method is hardly applicable. 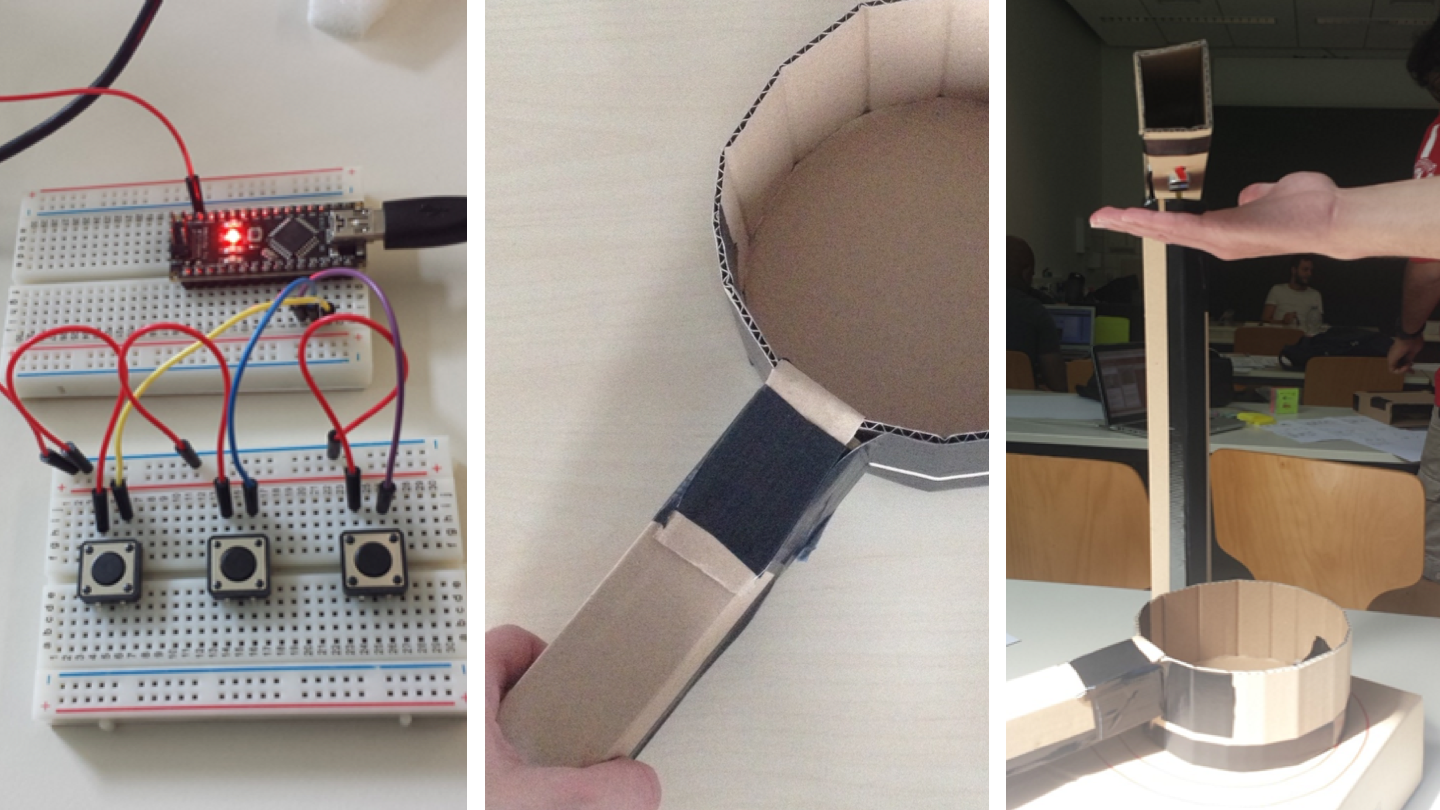 Results of our Rapid Prototyping

Taking our rough ideas from the ideation phase we now have to think deeply about every detail of our potential product. How does the cook set the time? How is he prompted to turn a steak? Where is the device positioned? How can we guarantee that the signal of our kitchen bell can be noticed in the entire space of the kitchen?

Building from the design studio we explored different variants of the idea by prototyping, judging their practicality and joy of use. A couple of different prototypes came into being: a simple appliance with three buttons, a smart pan which allowed to set cooking time by orientation of the handle and finally a small gadget which could be attached to an exhaust hood, parameterized by a full arm swipe gesture. The three different cooking times (rare, medium & well done) are set by the height of the swipe gesture.

In lean thinking, failing early is not regarded as a disappointment. On the contrary, by failing early we gain new knowledge, which we can then again use as fuel for our product design. We can fail very early during user research when we realize that our targeted user need does not exist in reality. After research, our ideas can still fail early in rapid prototyping rather than getting caught up in endless discussions. Fast and pragmatic prototypes allow us to discover flaws on our design before we ship an MVP to our test customers who would ultimately come to the same conclusion. This is how, prototyping helps to evaluate ideas in order to maybe let them die before they eat up endless resources or even cause a loss of reputation after delivering an unusable product to clients. 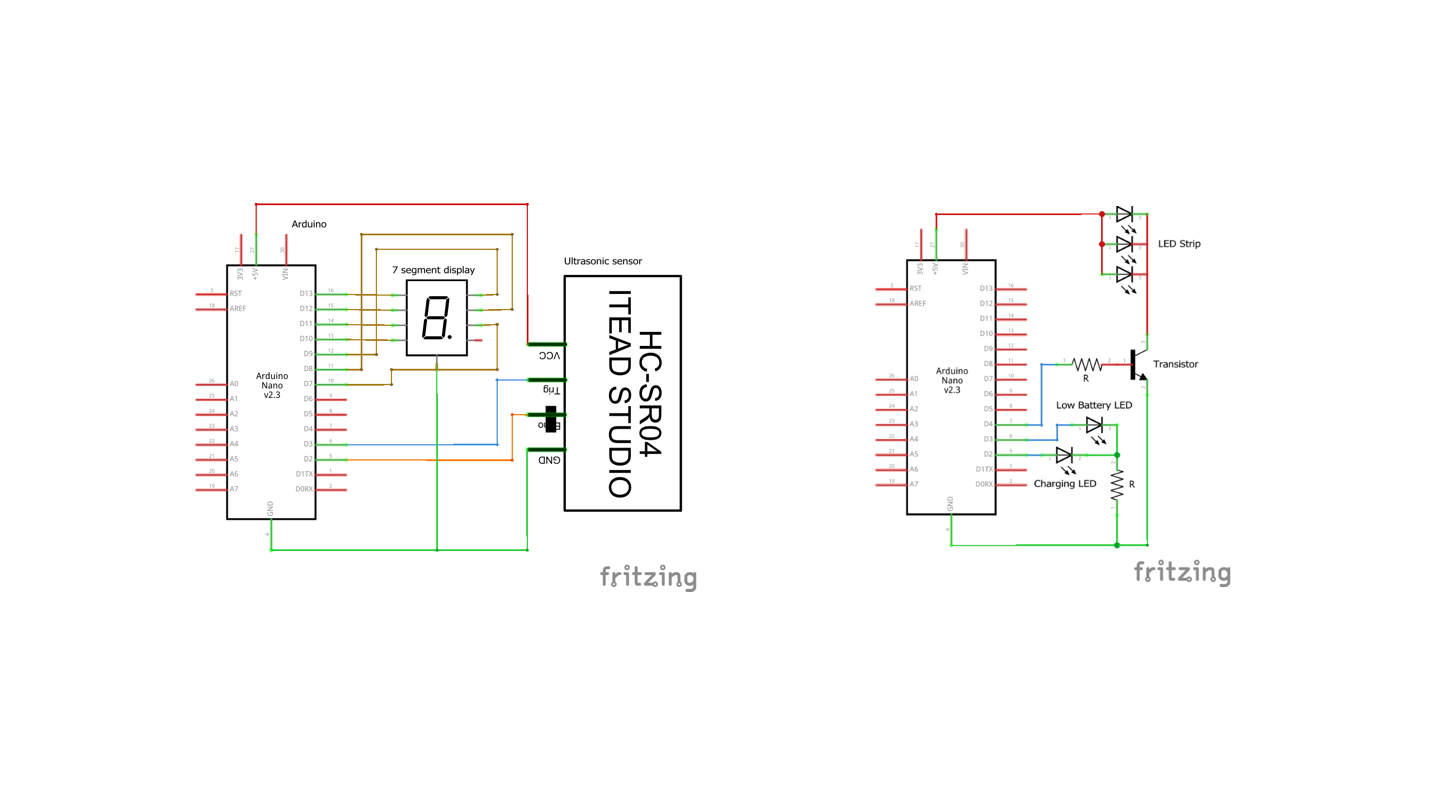 From an electro-technical point of view, the kitchen bell is trivial. A seven-segment display, an LED strip and a distance sensor make up the core hardware. The circuit diagrams are simple but they tell a story and fulfill a consciously selected user need.

We 3D-printed a simple casing for our hardware. We included a magnet at the top so it could be attached to the exhaust hood. Now the product can be tested in the real work environment! 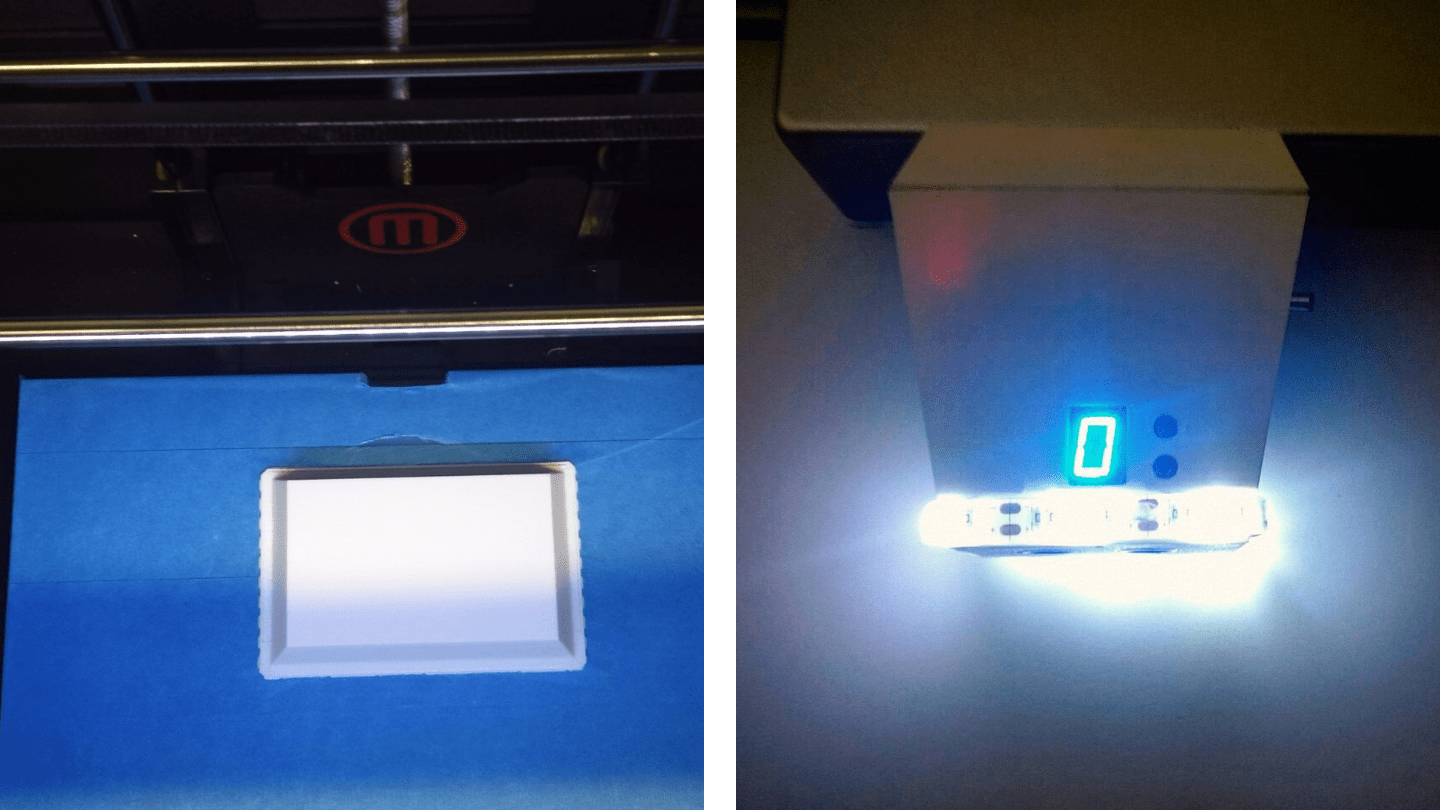 Often one will only get authentic feedback from users when the product is presented in their daily work life. Here we can use a very simple benchmark: does the product fulfill the user need?

Typical low-fi testing methods such as pen & paper unfortunately are not fit to evaluate complex, haptic products. They would rather test the concept than the product.

Since the entire process from analysis to the first MVP is agile and fast-paced, we consequently use the newfound knowledge from the product test in the next development cycle.

In case of the kitchen bell we went to the next-door cafeteria to get feedback on our MVP. According to this feedback the usage of our kitchen bell is indeed conceivable!

This is a key principle of Lean UX. Whether by prototyping, through product tests, or other methods, new insights continuously guide the development cycle. This is very helpful to align the direction of the project in short cycles to avoid falling short of reality.

Whether your team is heading into the right direction can only be uncovered by testing your product on the basis of an extracted user need as soon as possible. Being fast is also important as in modern development code is written early and agile. A small well-defined project focus helps to achieve goals faster and facilitates more interesting design ideas. This focus has to be explored deeply by employing methods creatively.

Lean principles help to get into the large field of IoT. They reduce risk by reducing the focus, explicitly managing knowledge and involving users early. At the same time the product creation is not driven by technical means, but by real human needs. Finally, by learning continuously, we are able to re-align our project time and time again.