How playful do you like it? Motivation and Potentials through Gamification and Serious Games

Lately, I have been asked more frequently, when Gamification will emancipate from its role as a niche topic and reach mainstream. Since mid-2016, I am sure, that we find ourselves just in the phase of emancipation of this topic and I would like to reveal, why this is my opinion.

During the last year, the media in German-speaking regions frequently covered Gamification: many TV productions, newspaper reports and scientific papers covered potentials of the use of motivational and playful elements in non-game contexts. But not only media response was consistently positive – also Centigrade received numerous requests for Gamification projects, some of which where moved into realization and, by now, are used on a daily basis.

However, one important question occupies many of our customers: How much “game” is suitable for a certain context of use as well as for users‘ and customers‘ needs. This question is crucial as playful and motivational elements can be integrated in existing processes and products in many different ways. Our customers also ask themselves which manifestation of playful systems fits best in their user context: are some playful elements enough or should it possibly be a full game to meet the pursued benefits? 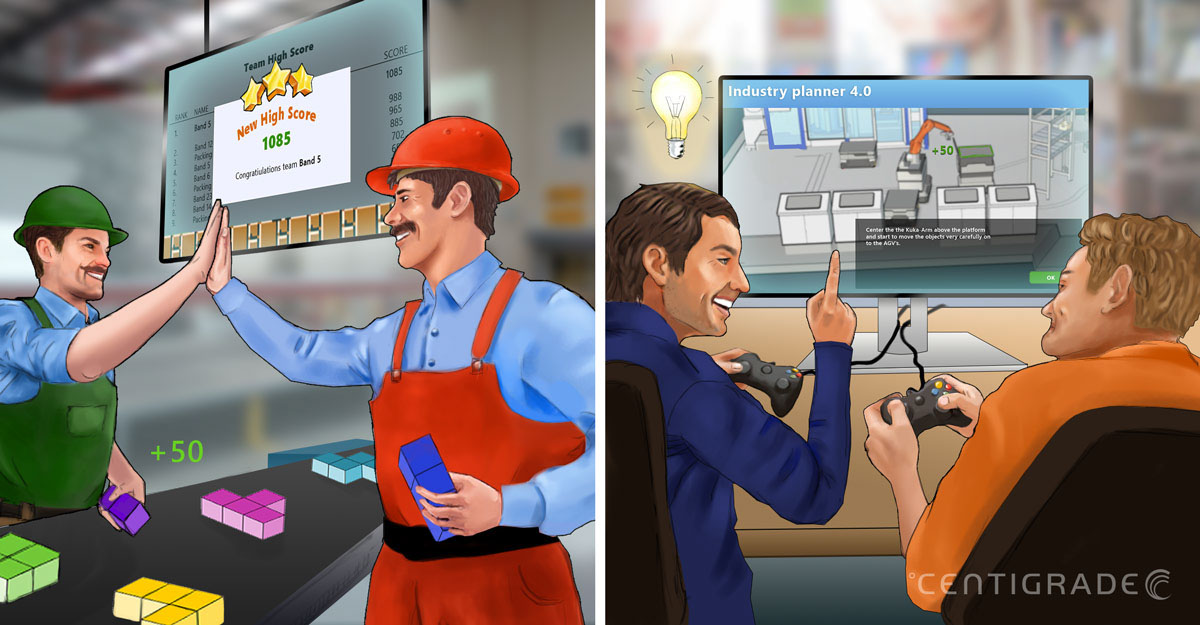 Gamification vs. Serious Games: Although both approaches share common traits, there are some significant differences when it comes to the application of playful elements.

This question in mind, this article covers similarities and differences of Gamification and Serious Games and aims at gaining better understanding of potentials as well as conveying possible scopes of application for both concepts and thus, facilitating the decision for or against one of them.

6 million years of playtime – on the power of playfullness

Both concepts commonly aim at reaching certain benefits that, with the help of playful elements and methods, go beyond the bare entertainment purpose. The basic idea of this combination is grounded on several factors:

Games are a thriving and powerful medium that has already conquered a fixed position in the midst of society – regardless whether we talk of mass-successes like the board game “The Settlers of Catan“ or the hype of “Pokémon Go“; games excite millions of people in both, analogue and digital matter, have been acknowledged as cultural asset in Germany [linked article is in german language] and became omnipresent on diverse devices. They are no longer just used by children: the USA’s average player is approximately 35 years old. Players spend a lot of time in virtual worlds; the accumulated playtime of all “World of Warcraft” users is over 6 million years alone. Also the economical value of games is rising and blockbusters like “Clash Royale“ and “Candy Crush Saga“ draw millions in profits per day.

[The following video documentary is in german language]

Those examples reveal the evolution of games during the last years and the potential that lies within: They inspire young and old through their imaginative design, they provide immediate feedback, motivate us to engage permanently in new challenges and let us go on adventures with players from all around the world. Especially the social activities in games enjoy great popularity: Multiplayer games, where a player can play with or against several other players, are frequently at the top of the sales charts.

Considering those successes, it is evident why scientists and developers are working for years on solving the question on how to use the excitement for games and the resulting motivation for other contexts of use.

Before focusing on contexts of use and benefits, we firstly want to consider the differences between Gamification and Serious Games.

Differences between gamification and serious games

We have already determined the common roots of Gamification and Serious Games but the question for differences still has to be solved. For this purpose, let us look at two definitions in order to gain a first idea:

Serious Games are games that aim at an additional purpose other than pure entertainment (Djaouti et al., 2015).

Gamification however is characterized by the application of game design elements in a non-game context (Deterding et al., 2011).

The most obvious difference is also the most important one: Serious Games are full games. When using a Serious Game, we are aware of playing a game. Thus, the user also has certain expectations: the game has to compete with other (commercial) games in regard to quality and entertainment factor. Therefore, developing a Serious Game can be an expensive effort as a full game has to be developed based on equal footing with other games. 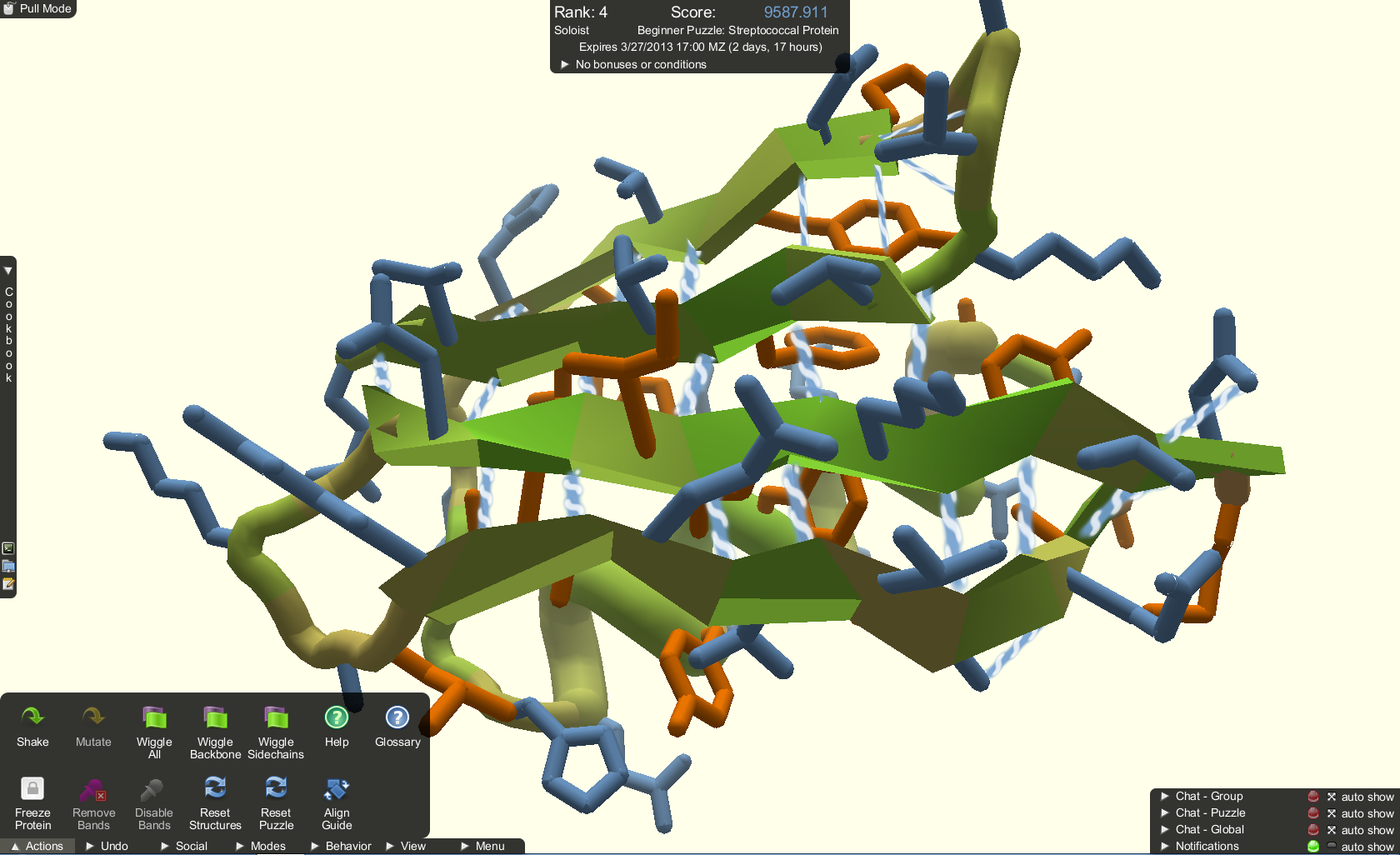 fold.it is an example for a medical serious game. Picture: fold.it

An example of a Serious Game developed by Centigrade is a quiz game about process knowledge for machine operating: the game teaches how to operate a machine in a target-oriented and error-free way in different situations. Serious Games are applied in many different sectors. The puzzle game “fold.it“ enables the player to experiment with the folding of complex enzymatic chains in order to gain new impulses, for instance, for the composition of new medications for HIV-positive patients. The action game “Re-Mission“ motivates children diagnosed with cancer to better accept their treatment and thus, enhances the chance of recovery from their severe illness. Companies like SAP also use Serious Games. In “SAP Roadwarrior“, the sales staff goes through a variance of simulated scenarios with fictional clients to impart them with mobile technologies. Those examples show that Serious Games highly enable players to explore different roles, to gain new perspectives, to simulate processes or to acquire knowledge.

Gamification pursues another purpose. In contrast to a full game, Gamification only uses single game design elements, as for example game rules, visual design elements or single concepts embedded in a non-game context. As for this reason, there is talk of “gamified“ applications rather than full games. Examples are the use of control patterns from strategy games in industrial manufacturing or the implementation of team scoring concepts in a production environment – both projects from Centigrade’s own development. Other successful Gamification applications are the “SAP Community Network“ that rewards helpful and active users with points, scores and awards as well as the selling system “Sell & Pick“ which gives targeted quests to sales staff in gastronomy to enhance the sales numbers of certain products. Only a few game design elements are often employed at this point: playful task assignment, displaying of progress and appealing visualisations provide feedback, create incentives and information transparency and thereby motivate the users in many facets throughout their daily actions. 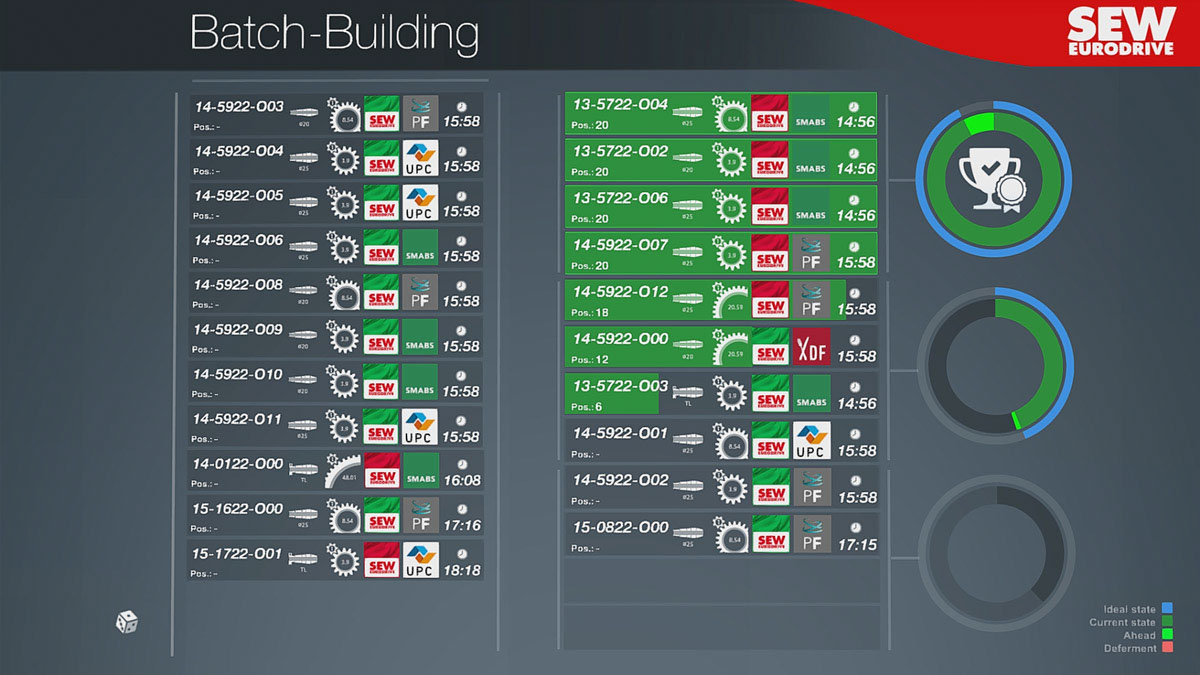 Already a few purposefully designed game elements can generate a huge motivational boost, as shown in this user interface developed by Centigrade for SEW-Eurodrive.

Gamification can even remain undiscovered in some cases: Users don’t have to identify the playful elements necessarily as such to perceive joy and motivation. Gamification elements often have a subtle effect and it is not necessary that users perceive them as “playful“.

An important difference between Gamification and Serious Games is the effort of their implementation. The targeted use of single game design elements makes Gamification less complex in conception and engineering and therefore less expensive compared to full games in most cases, as gamifying a process often can be realized successfully with only few adjustments.

Depending on context of use and objectives of a process and product optimization process, various different playful methods can be applied: The spectrum of possible approaches ranges from enhancing existing processes through Gamification elements that can be realized throughout a few days to a complex and more cost-intensive Serious Game.

It is all the more important to answer the following questions before applying Gamification elements to existing processes, services and products: Who are our users? Which benefits do I want to achieve in which context of use? How do I measure those benefits in order to prove if I have achieved my goal?

The answer to this questions can be supported by a design process that is strictly human centred. This means that business goals are formulated, personas are modelled and key scenarios for the subsequent application are formulated which form the basis for implementable units. Our process enables user centred and successful software engineering as we believe that, in the context of Gamification, standard solutions insufficiently map to users’ and clients’ needs. That is why we don’t produce „Gamification off-the-peg“ but create and test customized Gamification solutions for specific business problems that allow seamless integration in the respective context of use.

If you are interested in our services, you are welcome to get a detailed overview around here and feel free to contact us for a non-binding consultation.