Dreaming of being the champion or: What Software Developers can learn from Jogi Löw – Part 1 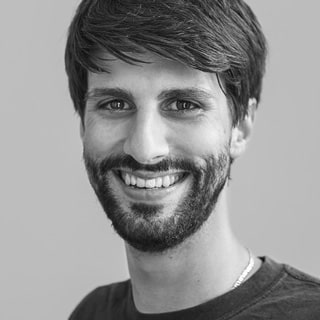 Since I decided to study computer science and media in 2007, I have been confronted with software engineering on a daily basis. Something else also is very time consuming and I am doing it with a lot of passion: sport as compensation to my office job. Since I can walk, I am fascinated by a 27 inch   large ball. My father passed this passion on to me. But what has football as a widely spread sport in Germany got to do with my job as a software engineer? In this blog post I am going to dive into it and take a close look at possible similarities. The first part is about basics, gathering an initial understanding of the subject. In the second part I will take a closer look at methods that we as a company see as added value in this regard.

Currently number one in the world

2014, what a year. The German national football team became World Champion in Brazil for the 4th time and the whole country celebrated. A wave of euphoria swept through large parts of Germany. But how could our national soccer team become number one again after more than 20 years?

In my opinion, it all began with the EM 2004. 0:0 against the football giants from Latvia. Failing in the preliminary round! We were far behind being a world class football team. What happened? We had been absolute world class before. Unfortunately, the players at that time were no longer active and other countries had overtaken us. What to do? The DFB thought about it and a change began. A key point was the youth development. A talent development program was launched.

„Perspective goal: greater potential of future top players for the DFB team, but also for all clubs in the licensed and higher class amateur football“ (Source: DFB) 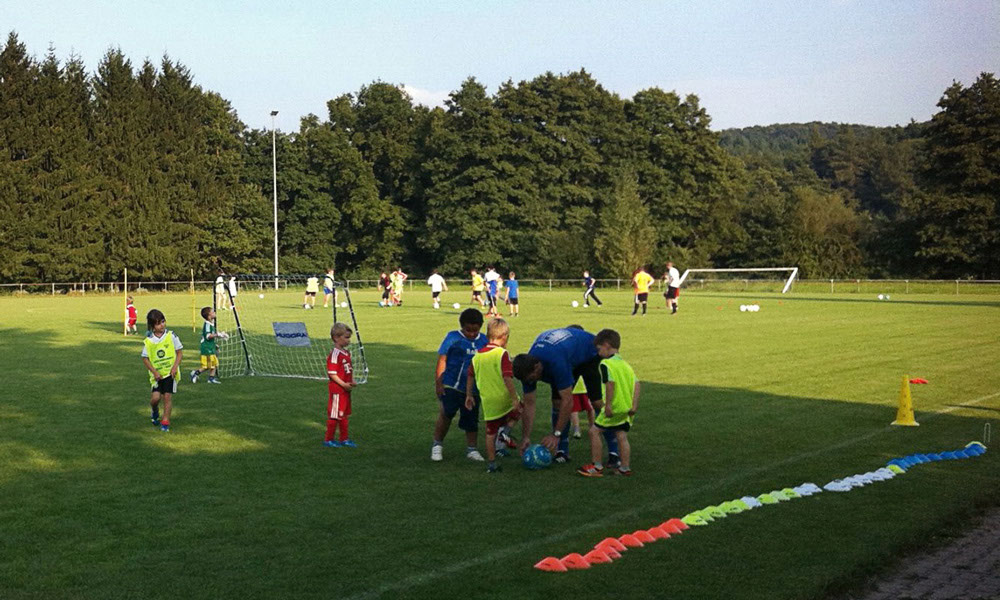 By well-trained instructors and a strong presence in the clubs, the goals of the DFB were able to be conveyed to the young. World class players like Jerome Boateng and Mario Götze are the result of this work.

So now, let’s compare football to software engineering. I remember my school days. Promoting talent for tech-savvy kids? Computer games were frowned upon by teachers and having fun with technology was difficult. Instead, learning topics were worked out strictly according to the curriculum. Motivation and enthusiasm through practical work was a scarce commodity. That’s why I am happy to see people are getting more and more interested in providing technical knowledge in a fun and informal way.

This includes the initiative of the “Wissenswerkstatt Saarbrücken” which is, so to speak, supported by us and other companies as a measure of regional youth development. The club set itself the goal to offer practical learning opportunities in the natural sciences and technology to children and juveniles. The club therefore organizes courses where young visitors can try out technology, create it and find a positive approach to the subject itself.

Another positive example comes from Dr. Rainer Stetter, CEO of our partner ITQ:

„Our society is supposed to prepare knowledge in general and technical knowledge in particular in a way that young people absorbe it better. Therefore, the foundation is called “technology is fun”, because in the end, we all want to have fun, especially young people.“ – Dr. Rainer Stetter, Board of Management (Source) 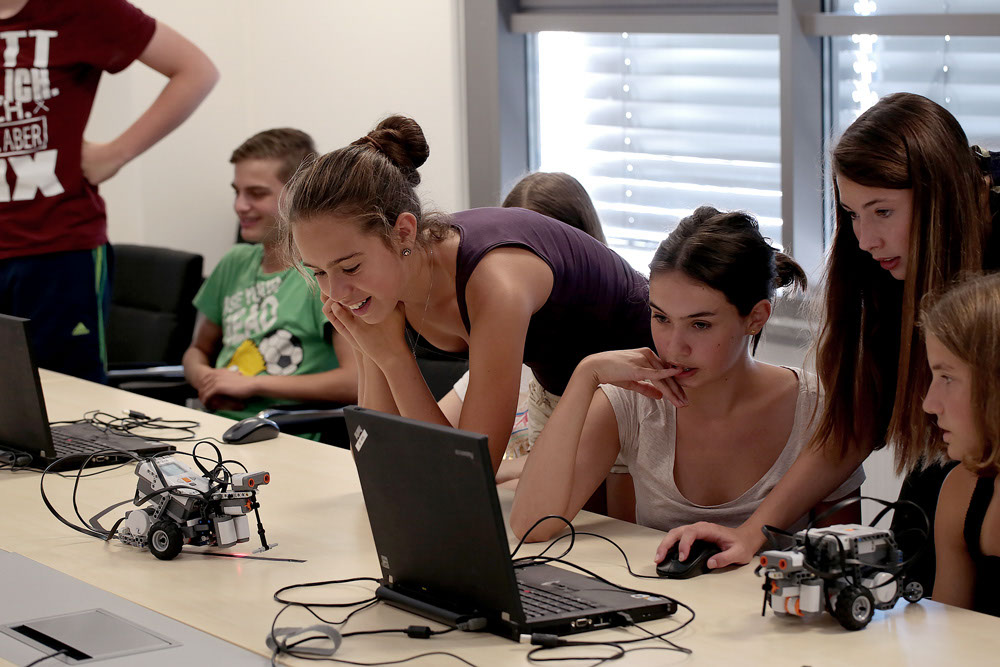 So we as part of the IT sector should quickly make sure that motivated youngsters find their way to software engineering. This year I had the opportunity to supervise a student internship at Centigrade for the first time. I was thrilled to see with how much passion our intern worked on the topic “increasing software quality through automated Unit Tests”. He achieved excellent results. Of course, we as a company had to invest time for supervising the intern. But as a result we had completely automatically tested code for our internal tools and even more importantly, a motivated young developer who now thinks about studying computer science. For me, this is a very nice analogy between findings from the field of professional football and software engineering.

Let’s go back again in the football team’s history. 2006, a summer fairy tale. Germany presented itself to the world. It is clear that the players were under enormous pressure since the fans wanted to see them lift the trophy. The remaining football world also took a close look to the host country’s team. One man met the challenge: Jürgen Klinsmann. I think, he is the first rule breaker on the DFB team. He no longer lives in Germany. The United States have become his adopted country. Many asked in advance “How is that supposed to work?”

Klinsmann takes a different route. He radically transforms things and breaks rules. Not just like that. He has a plan and he follows it with 100 % passion. He believes in his ideas and is making every effort to realize them. Does he do it alone? It would be presumptuous to even try. The project is simply too big, the requirements for the coach and the players are too complex. The media pressure, sporting aspects, health, all that has to be 100 % right to successfully play a tournament. So Klinsmann needs allies – people who support him. He needs a team. What does this mean exactly? Someone who has never been involved in a team sport will think it only needs 11 players who can play good football. But in my experience, far more is necessary.

Klinsmann broke an old rule and introduced a larger coaching staff. He enhanced a traditional coaching team with experts from various disciplines and improved it thereby. Psychologists, fitness coaches, sports managers, to name a few. He was one of the first football coaches who included a psychologist in his work. How should the players achieve their peak performance when the psychological pressure clearly blocked them? Prof. Dr. Hans-Dieter Hermann helped Klinsmann and the players in delivering first-class performance. At this point, I highly recommend the book “Make them go” by Prof. Hermann which gave me a lot of inspiration for this article.

This approach looks familiar to me. We here at Centigrade not only have software engineers. Instead, we have a team of experts from various fields due to the increased demands on software and the complexity of the projects.

The reliable defense that does its task solidly and analytically . In our expert team, these are the software architects. They are one of the most important building blocks in a software project. But managers often do not understand why so much time should be allocated to this work: “We just want to see features.”

The midfield bis to play dominant and solid. No great stunts. Simple passes forward and ball interceptions. The midfielders of the expert team are the interaction designers. Not getting too complex but still delighting.

The modern striker is expected to be creative and tricky, inspiring the masses. The acclaimed star of the spectators. With us, the strikers are the visual designers. They create aesthetic user interfaces, inspire the management and make visions tangible with first designs.

Of course, the captain as the long arm of the coach is important, too. Someone accepting responsibility. At Centigrade, the role of the UX manager reflects this task.

And finally, it needs a coach with a vision. In our company, this is the task of the management. Finding new approaches and moving away from traditional, fixed structures in order to reach goals. Therefore, for me the most important quote in terms of software projects comes from no one less than world champion coach Jogi Löw:

In order to meet this principle, we need to focus on different tasks. We arouse enthusiasm through tangible visions via screen mocks, prototypes etc. On top, our quality-conscious work throughout the project period lets visions become reality and ends up in specific software.

When we first meet the customer and introduce our different disciplines, I often see Centigrade in the role of a rule breaker. In the beginning, many customers are shocked that so many people are required out of a sudden. Previously, the developer all made it on his or her own. The picture shows a practical example of our team structure: 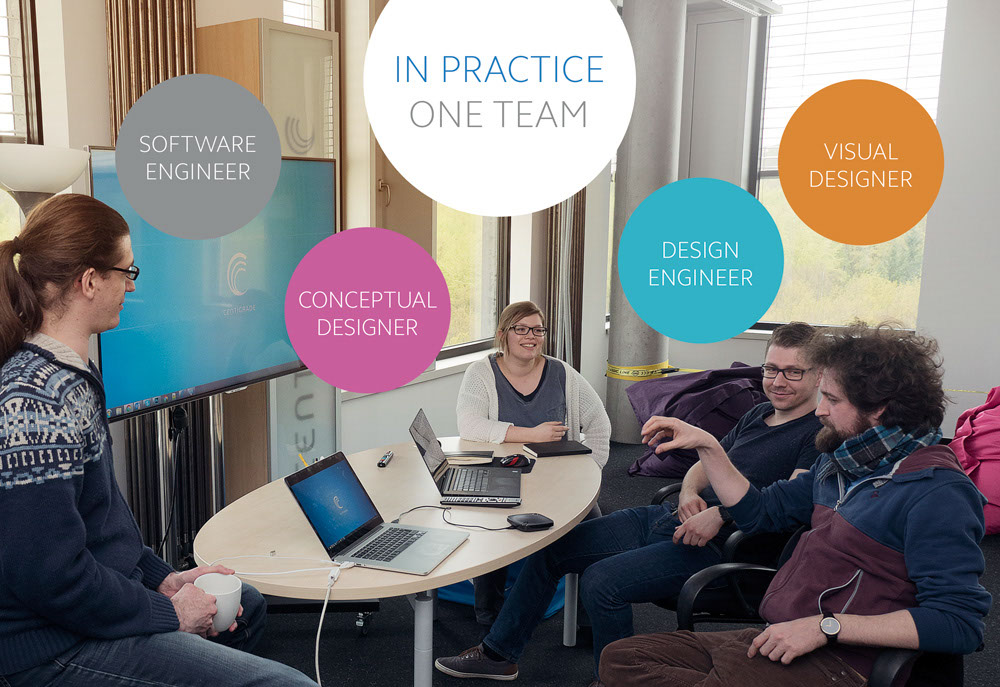 As you can see, modern software development teams have recognized the signs of the times. A discipline alone will find it difficult to develop successful software. Interdisciplinary teams of experts must work together as a group. With our longstanding customer TRUMPF, as an example, wWe have been working together successfully in diverse projects in these kind of constellations.

In May, you can read more about methods and factors we consider important for creating a winning team in part 2 of this article.