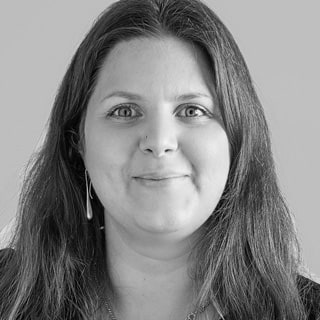 Hannover Messe 2017 – Enterprises present their new technological miracles: robots that can play the drums, robots that play table tennis, robots that move like animals, 3D printers, VR worlds and AR glasses that combine the digital and physical world. Let us be honest, as visitors of the exhibition, we are, of course, entertained but some might have asked themselves what kind of substantial benefit one or the other exhibit might bring to the daily production routine.

„Our Chancellor always calls on us to be cautious not only doing nice things but rather things that are profitable and productive and this is what we tried to do here.“

As User Experience providers, we are always happy to see when companies are more deliberate: our customer SEW Eurodrive portrayed a complete production process at its exhibition booth. From the moment of ordering to the finished product, the visitors could experience what it means when robots are used efficiently and the human machine interaction goes hand in hand.

What seemed to work smoothly and natural at the exhibition booth, took a lot of effort in the setup. The smarter and the more autonomous the robots and computers interact with each other, the more important it is for the human user to maintain an overview of single steps in the production process. In the following, we want to explain how visitors of Hannover Messe were enabled to monitor and operate the production process at the SEW exhibition booth through playful, intuitive and accessible 3D user interfaces.

Entering the exhibition booth of SEW it looks as if an area of a production hall was simply taken to the exhibition grounds. Employees are taking engine components from shelves and putting them together on mobile and autonomous working platforms. Beside the human employees, automated guided montage vehicles (AGVs) are moving around the shelves, robot arms are sorting engine components.

The first impression is not misleading, a duplicate of the Graben-Neudorf showcase factory was moved to the exhibition. The visitors can take the role of production leader, the „conductor of the value creation chain“. Monitors can be found all around the factory hall where working orders can be put together and the production can be monitored with regard to progress, errors and problems.

During the first step, the visitor puts together an engine using the product configurator. The Configurator shows the single steps via real-time-3D-visualisation and provides the user with a clear image on the components used. To start with the user chooses the desired ratio. At this point, curve graphics clarifying the relation between torque and number of rotations besides information on material. Along with the animations of the engine, this facilitates the user’s decision-making process. During the whole process, a status bar making the progress of the product configuration tangible, is displayed. One after another, wave and torque-log are chosen, followed by the engine branding through a corporate logo, oil (at this point it is, for example, possible to choose an oil that is approved for food) and a delivery date for completion.

When several orders were generated this way, those have to be sorted by priority. This so called “Batching“process requires good planning and efficient use of resources available (employees, AGVs, other robots). The visitors can plan batches with regard to different criteria using the Batching Interface. A visualization is constantly given which takes live data from current production processes into account and consequently determines how efficient the planning is rated throughout production. As a result, the visitor as „conductors of the value creation chain“ is able to make well informed and fast decisions.

The left screen space contains a list with unsorted orders. Production elements that are not yet in process, can be dragged to slots on the right and sorted into processing order. The list on the right is then executed top-down – up to three production orders can be processed parallel.

The production progress is visualized in two different ways: a green progress bar placed directly on the element and circle diagrams for the three active orders. Blue symbolizes the target value, whereas the line in the inner circle represents the current time. As long as the production remains in the range of the target value, the line is colored green. When the real time exceeds the expected time the overflow is expressed in red.

In order to keep track not only of the current orders but all resources, there is an additional interface. Here the visitors can see the detailed state of every single production element in a 3D visualisation. Every AVG, every robot and every other element can be selected via finger tap to show all relevant production parameters.

The otherwise invisible communication between machines and robots becomes visible as well. Which instructions were sent automatically from where to where? Why is the AGV with the Kuka arm currently driving back to the storage area? Thus, the question if everything goes as planned is immediately answered.

Interfaces in the production hall: The employee right in the middle

Die human employees profit from an effective and transparent production. The mobile working platforms provide monitors for the employee with working instructions and information on the production status. Furthermore, the single autonomous production stations inform about what robots and computers are currently working on.

Despite all transparency and overview, there is no assembly line that is fully protected from errors. Therefore, SEW builds on advanced methods of Predictive Maintenance. With this method, problems can be anticipated and consequently avoided in advance. In its visual form, the Predictive Maintenance also uses the 3D system visualisation, enhanced with much additional information such as machine states and abrasion values etc.. This application especially got a great reception from exhibition visitors.

The assembly line model at Hannover Messe 2017 was the fourth iteration of the SEW-EURODRIVE show case factory that Centigrade could support with interface design and interaction concepts. And after winning the German Design Award at the beginning of 2017, the project did not stand still. There are always new technical opportunities to be found to optimize the communication between human and machine further.

SEW-EURODRIVE showed at its exhibition booth on Hannover Messe 2017 how human and machine work together hand in hand today. As a result, faster production times for individual orders become possible, technicians and production leaders are supported in the most optimal way. Thanks to visualisations that are easy to consume and interaction concepts that are intuitively accessible, the human employee and operator has the most comprehensive overview of all production processes.