The start of a new UX designer role model.

A lot has happened … and then it hasn’t.

I’ve really been around the so-called UX scene for quite a while now. As the owner and CEO of Centigrade, I’ve been running one of the most successful UX companies in Germany for over 15 years. But since I moved from video game development 20 years ago into what was then called usability and user interface design, not much has actually changed. Sure – new tools have emerged and disappeared again. Methods have been hyped and then replaced by supposedly even better methods. The end devices and design options have become more numerous and somehow no one talks about pixels anymore, because that was settled with 4K monitors at the latest.

Apart from that, however, from my point of view there has been a lot of name maintenance and renaming for one and the same goal. For example, the term usability engineering was suddenly no longer as en vogue in the community as, for example, UX research. And suddenly some of us were no longer talking about task analysis either, but about the jobs to be done method. Even the once much-cited term User-Centered Design is now trailing behind the term UX Design.

Is this really just a matter of maintaining the name or are there real differences behind it? The answer, as so often, is: “Both and”. For example, there is definitely an important difference between usability and user experience, which is why one should pay attention when one group talks about usability engineering and the other about UX research.

Usability or usability in a nutshell is:

“The extent to which a product or service can be used by specific users in a specific context to achieve specific goals effectively, efficiently, and satisfactorily.”

“The perceptions and reactions of users before, during, or after interacting with a product or service.”

If you are interested in the source of the somewhat reworded definitions in detail, please refer to the DIN EN ISO 9241, 210 standard. But regardless of individual variants of the two definitions: The biggest difference between user experience and usability is that user experience is obviously first created in the mind of the user, regardless of whether the user is currently operating a system or not. UX is thus completely subjective and irrational and beyond anyone’s control. Or, to put it another way:

Thoughts are free – and so is the user experience.

Isn’t it presumptuous to believe that a single team member can design UX? According to this, a UX designer would be a designer of perceptions and reactions, or, to put it nastily, a mind controller. To a limited extent, this may even be true, if e.g. certain behavior patterns are provoked by nudging and gamification.

Nevertheless, I find this kind of definition not only presumptuous, but even harmful to the wonderful profession behind it. The term UX Designer as a description of a professional role does no good because it elevates the UX Designer to a pedestal from which he can only fall low. The expectations created by such a subliminal term hybrid can only be disappointed.

A single UX designer usually has neither enough knowledge about end users nor enough control over the digital product development process. Unfortunately, it can therefore be assumed that UX designers do not evoke the exact perceptions or reactions in users that they have imagined during the design of a product or service. UX is only created in the user’s mind by the very product that fell out the back of the entire development team after implementation.

We have to realize that the real control over the quality of a digital product or service lies with the development team as a whole – not with individual UX designers. To even have control over the perceptions and reactions of individual users is currently still an illusion.

What remains of the magic…

The lack of control of the UX designer over the final product or even the users’ reactions can be observed manifold in the modern agile software development universe as well: A whole armada of “smart” software engineers faces a small group of “creative” UX designers. And a software engineer sitting in front of a design specification that is not very engineering-friendly will understandably do what he or she thinks is good, right and – above all – feasible in the agile, autonomous development team. If this results in a good user experience, then that’s more luck than design. And since luck is unfortunately rarely with us in our day-to-day professional lives, the magic of the beginning (which I’m sure every UX designer has experienced during a redesign) quickly turns into the disillusionment of the end: 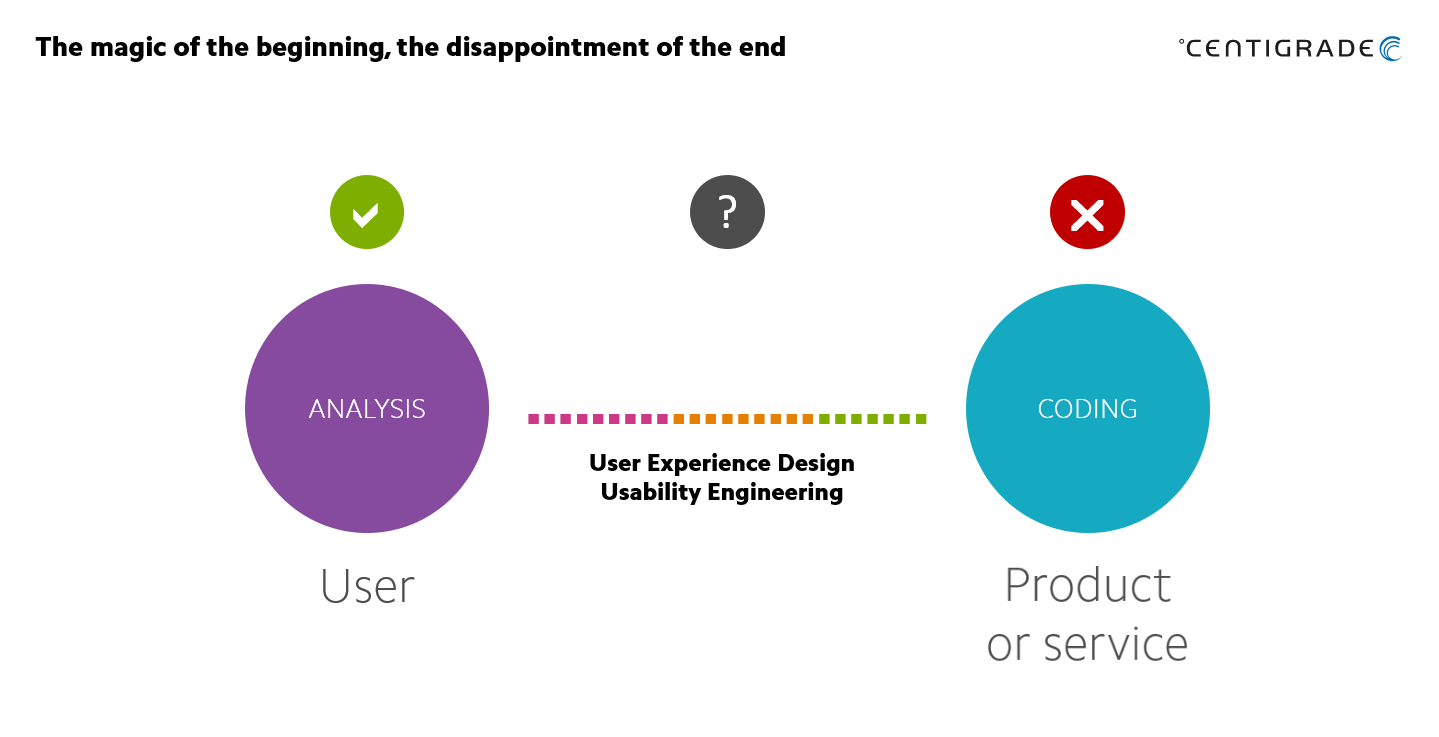 To use a less heroic but more satirical image: while the UX designers in the background are burning their fingers on their designs, the software engineers in the foreground are pushing the UX buttons they think are right. And, hey – this UX can’t be that hard if you’re able to oversee hundreds of thousands of lines of working source code, right? 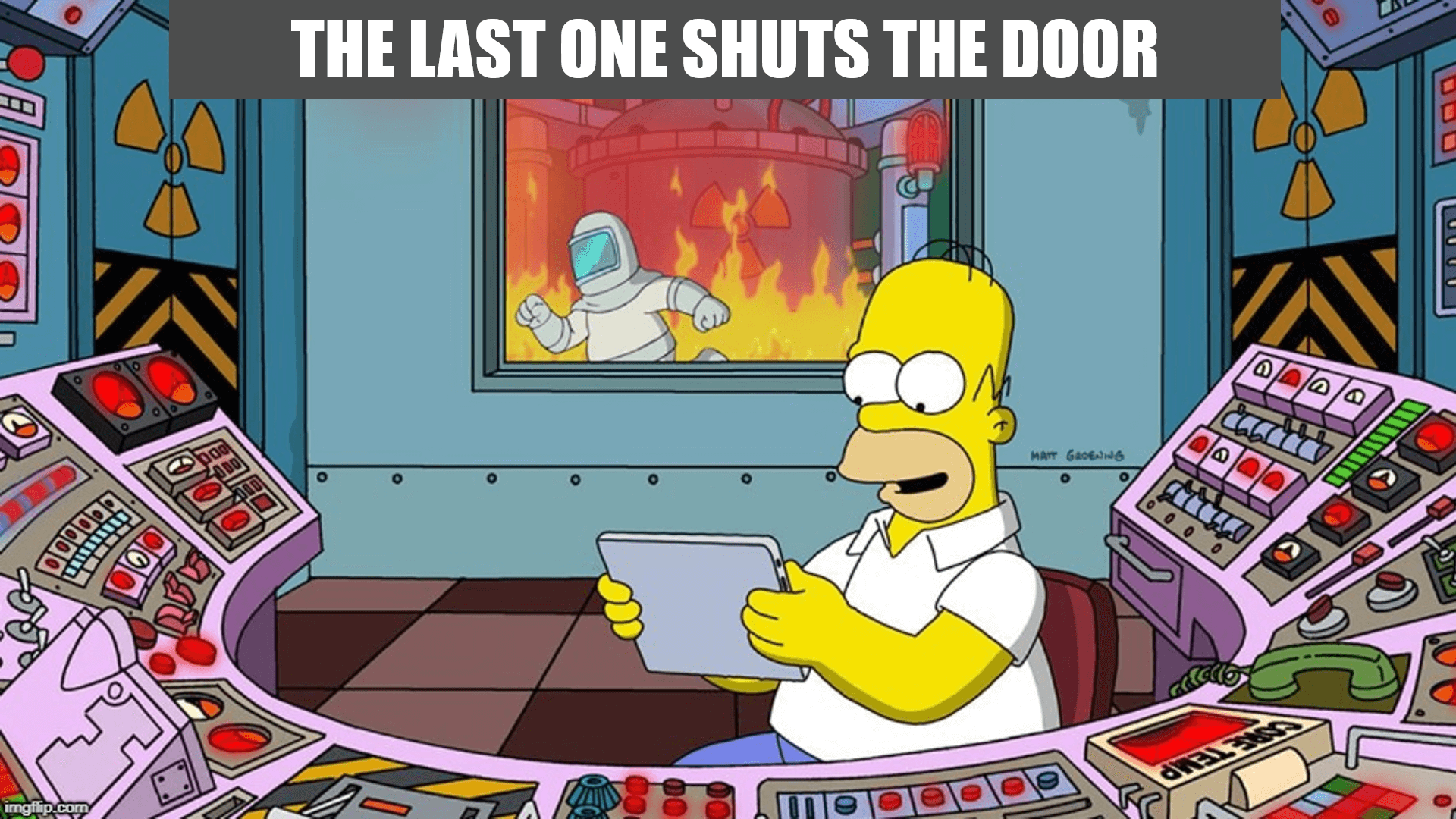 Even if it sounds completely different right now: I have the utmost respect for the software engineers. They are indeed the last ones to close the door. If we delete the satire, it means: they often implicitly take the greatest responsibility for the quality of a product. They are forced to proceed systematically and to continuously educate themselves, otherwise their digital product with all its bugs and defects will haunt them until they sleep. They have to face hard facts like what percentage of their work is covered by test code or how many regression bugs they were able to fix in what time. And the compiler? Well, it’s merciless. A typo here or there and the product doesn’t even get in front of the users.

Nevertheless, I believe: the effect described here, that the last person in a supply chain often also feels most responsible for the end result (or is perceived that way by outsiders), must be broken through together. The doors must not automatically close behind the software engineers for the UX designers – but they must not remain open either.

How can this succeed?

When someone asks me if I feel more like a designer or a software engineer, I answer without hesitation: “Developer!”. Wait a minute… that doesn’t really answer the question, does it? Yes, it does. My point is this:

As long as we use the terms ‘developer’ or ‘developer’ as synonymous with software engineer, nothing will change the gaping hole between designers and engineers. 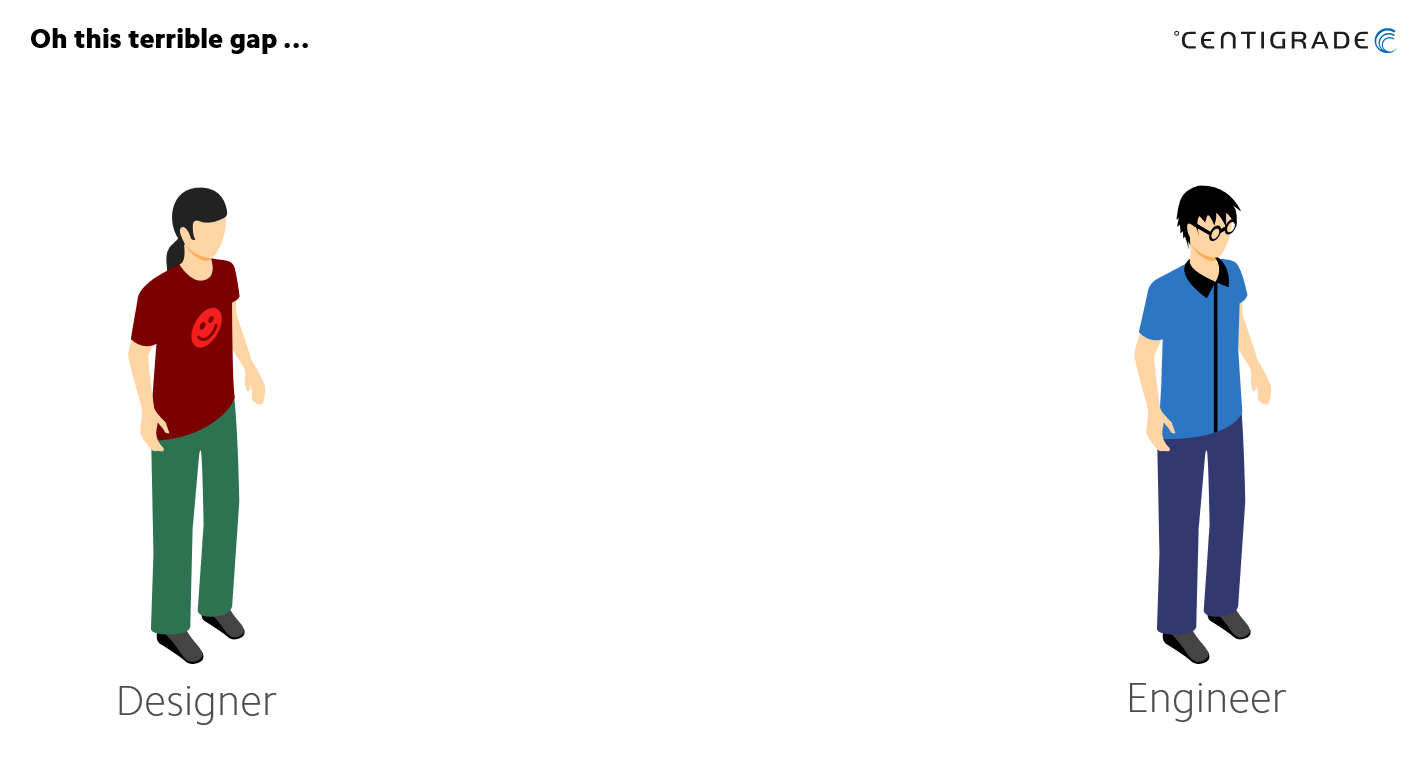 In the video game industry, all team members who significantly influence and develop the quality of the game are developers. The specific discipline of a team member is secondary. Whether character artist, 3D modeler, story writer, level designer, lead engineer, game tester, scripter or whoever – everyone on the team contributes their tiny part to the overall development.

After all, the term “development” arises from the very idea of systematically bringing something to fruition from start to finish. In terms of UX, this means: excluding user research, conception or usability testing from the development team would certainly be exactly the wrong way to go. On the contrary:

We UX designers must bring ourselves into the game as ‘developers’! Only collaboratively and together with all other team members can UX design succeed. 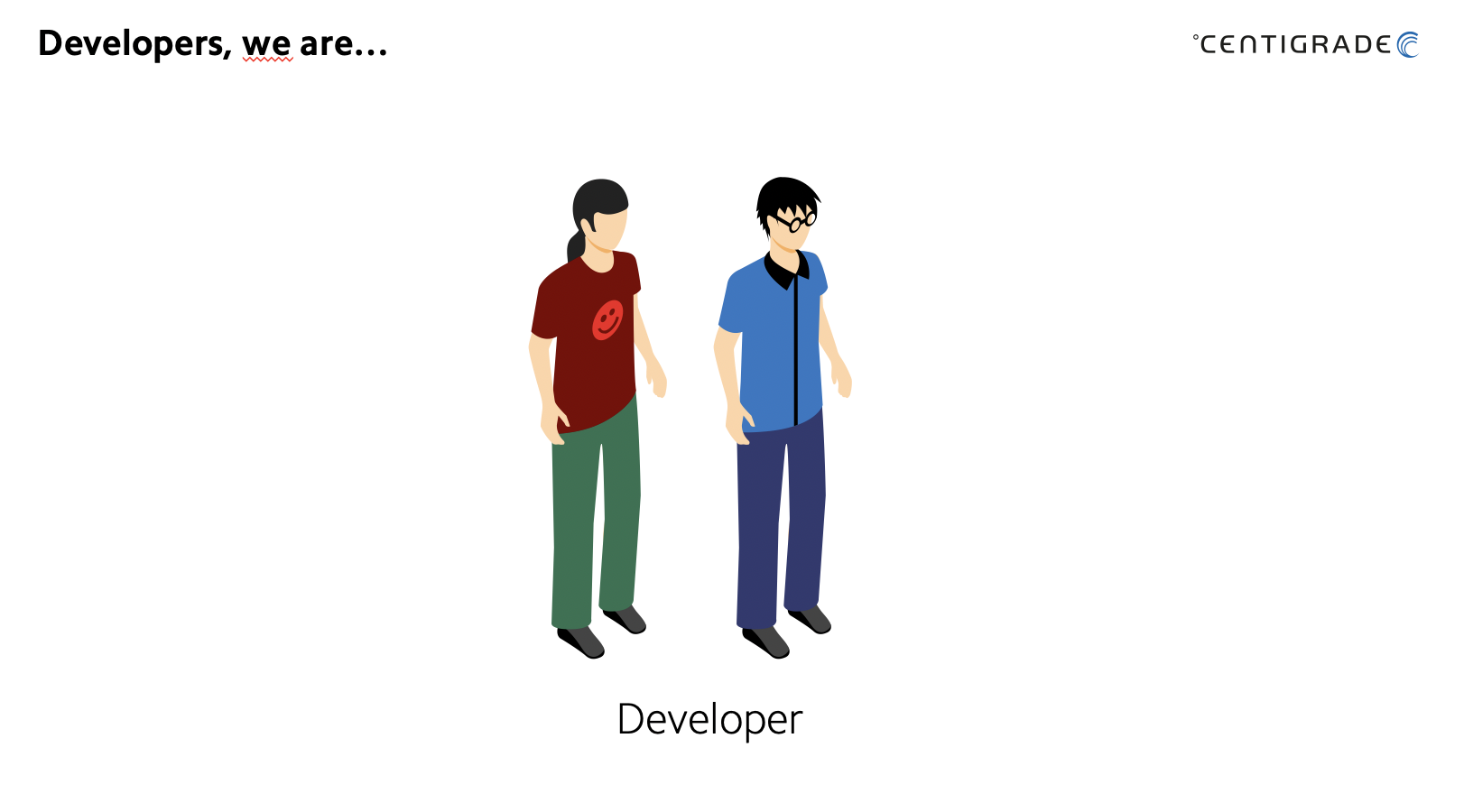 I’m really keen to see more and more digital products and services being created that, according to the current UX definition, evoke more pleasant perceptions and reactions in more and more people. That’s one of the reasons why I believe in the power of gamification. I love the magical moments that occur when we are in a productive flow state. That narrow corridor between being overwhelmed and underwhelmed brings us into energetic focus and allows for complete immersion when using a digital product or service. That’s well worth any UX effort.

To achieve this desirable flow state for both the team and users, UX designers must adopt a new attitude toward their vocation and see themselves first and foremost as developers, and thus as part of a larger whole, rather than cockily – or at least not very humbly – making up concepts and designs with themselves.

User experience begins with the ability to empathize and take perspective. So good UX designers should already have this “special power” anyway. However, they should not use it exclusively for the benefit of users, but also for cross-border collaboration with software engineers.

More perspective taking, more mutual appreciation and more empathy for the craft of other disciplines will automatically lead to less handovers “over the wall”, but more collaboration, introspection and inspiration germinating in the whole development team.

The following starting draft of a first new UX designer role model is intended to help you as UX designers adopt a sharpened attitude towards one of the most beautiful disciplines in the world and thereby become more effective in the development team:

I’m only mentioning the first 5 building blocks of what will surely be a more comprehensive UX designer role model later on. Of course, these are the aspects that move me personally the most. However, I am convinced that there are significantly more points that can sharpen and modernize the UX Designer role image.

Therefore, I would like to open the discussion at this point and invite you to add further thoughts – no matter if you share the same basic conviction as me or if you are more ‘constructively controversial’ towards my remarks. From your collected works, I will then gradually distill further versions of a new UX designer role model. I am looking forward to your feedback.

Let’s modernize the role of UX Designer together to make the digitalized world of tomorrow a little bit better with better products and services.