Is gamification compatible with Industry 4.0? There is only one way to find out: To create a realistic setup. At the Hannover Messe we had the chance to do just that. 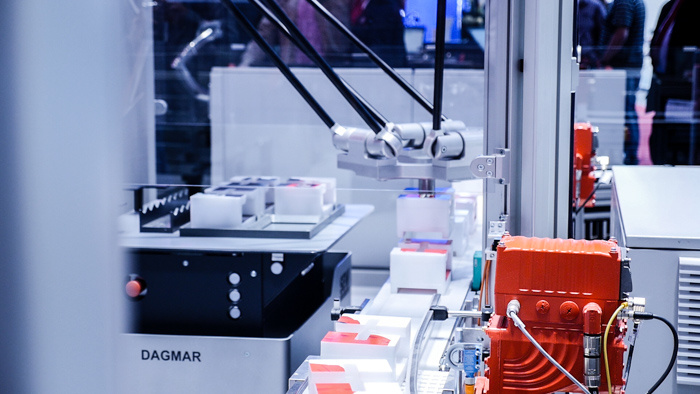 In two of our preceding blog articles about gamification we discussed how a design process for playful interaction should look like and, based on this knowledge, how to cope with the challenges of bringing gamification to the area of industrial production.

In these articles I explained that gamification is not a game in the traditional way, but instead a well-directed implementation of singular game mechanics and visual game elements in a non-game context to e.g. increase employee motivation, foster knowledge exchange or optimize process efficiency. The gamification process centers on the users with their needs and interests, who are supported by the combination of an attractive user interface design as well as substantial interaction mechanics in order to achieve their goals.

SEW-EURODRIVE as an innovation driver for Industry 4.0

This blog article will not only dive deeper into the topic of industrial gamification but also present an outstanding project from SEW-EURODRIVE, who takes a leading role in defining the Lean Industry 4.0. We were pleased to support them in implementing their vision.

For the Hannover Messe 2015 Centigrade implemented the user interfaces for multiple applications in the context of automated production of the forward-looking exhibit of SEW-EURODRIVE. SEW-EURODRIVE is the world market leader of industrial drive technology with 16.000 employees in 45 countries and with a strong sense for quality, diversity, reliability and innovative capacity. 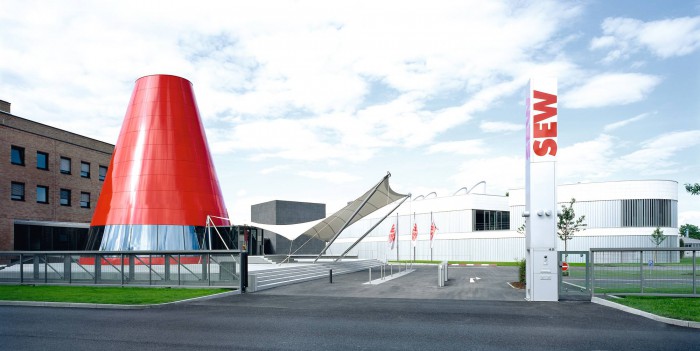 The main goal of SEW’s exhibit at the Hannover Messe was no less than communicating their vision of Industry 4.0 by incorporating innovative, autonomous transport and assembly vehicles as well as state-of-the-art automation technology like industry robots with optical position recognition. But not only the hardware broke new ground: SEW also showed courage in the field of software development and chose gesture-based interaction, 3d real-time visualization and augmented reality (AR) technology. In this manner, SEW opened the trade fair visitors from all over the world a first extensive insight into the future of production and logistics in Industry 4.0. 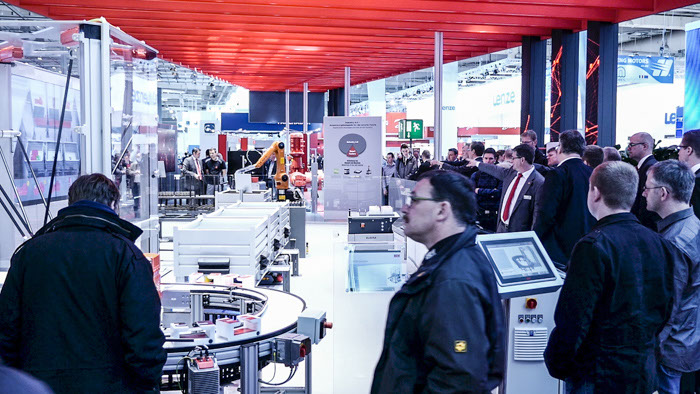 One key component of SEW’s exhibit was the indirect control of autonomous guided vehicles (AGVs), which serve as mobile assembly and transport assistants in production facilities. The application combines forward-looking augmented reality technology with playful interaction. But the question remains: Why use gamification in the context of this application? On the first glimpse it might seem surprising, but some of the problems within the interaction with industrial machinery are the same problems games try to tackle. This leads to the assumption that solution approaches from games can also be used to solve problems in the area of industrial production. For this reason, the present blog article will highlight the analogies in the challenges and solutions by providing corresponding examples.

The scenario shown at the Hannover Messe takes place in a future production facility where the majority of intra logistics is performed by autonomous-guided vehicles (AGVs). These vehicles transport goods from A to B by the command of machines and users or serve as a mobile assembly assistant which follows employees in their process or moves to an employee who undertakes the next process step.

After the final assembly step, the products reach a row of carrier boxes which transfer the products, according to their type, to different packaging machines. For this purpose, the user interface focuses on the lined up carrier boxes from a bird’s eye of view. The visualization is created with augmented reality technology: The user sees a video stream from the ceiling of the production facility which is transferred in real-time to the application and augmented with additional user interface elements. Parts of these elements are status information menus for each carrier box. They also show controls which allow the user to place products via drag and drop actions into the boxes. 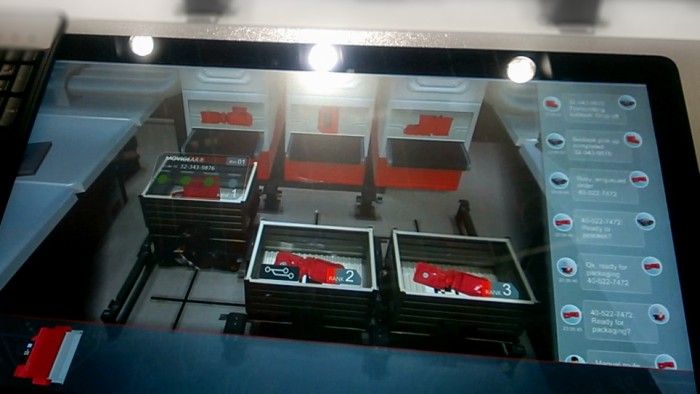 The user interaction starts with selecting a product via touch input. At that moment, one of the available carrier boxes is highlighted through an animation to provide a visual clue for the user which box would be the best choice for transporting the selected product. Accessing the order data, which incorporates e.g. the target position for the next process step, generates the foundation of this visual clue.

As soon as a product is placed in a carrier box, the application transfers information about product type and order status to an AGV. The vehicle starts moving without the necessity of another user command and maneuvers itself beneath the box with the product. Then the AGV lifts the box and carries it on the fastest route to its target destination.

Let’s have a closer look at the requirements of our scenario: Indirect control over a large number of mobile vehicles. An overview of all running processes. The possibility to gather information in a fast and intuitive manner. Changing the process with a few interactions.
Analyzing these requirements, one could presume that models and sources of inspiration can be found in the area of logistics and supply-chain-management. As mentioned at the beginning, we consulted another source of inspiration: Games.

In order to create an optimal interactive experience, we considered playful approaches for the indirect control of processes and vehicles during the conceptual design of the user interface. In the game genre of strategy games which often focuses on resource management and control of mobile units, lots of great examples for indirect control of vehicles and processes can be found. Given the fact that I enjoy playing strategy games myself and also happened to be a game developer of such games for several years, this analogy was pretty obvious to me.

In the game Starcraft II, players issue complex orders through simple target assignments. For example, if the player selects a space construction vehicle (SCV) and assigns a gas refinery, the unit will receive the following chain of command:

The AGV in our industrial application acts in a similar way: Loading a product into a carrier box triggers the chain of commands. This action calls a vehicle which loads the carrier box, delivers it to the defined target position, unloads the box and moves back to an optimal position for awaiting further orders. In our game example, the status of a vehicle is accessible by clicking on the correspondent unit. In analogy, our application augments a carrier box with a status window when the user touches the box on the screen.

You have reached your target position

In the game X-COM: Enemy Unknown the player receives several options for action visualized as movement paths in the game world. 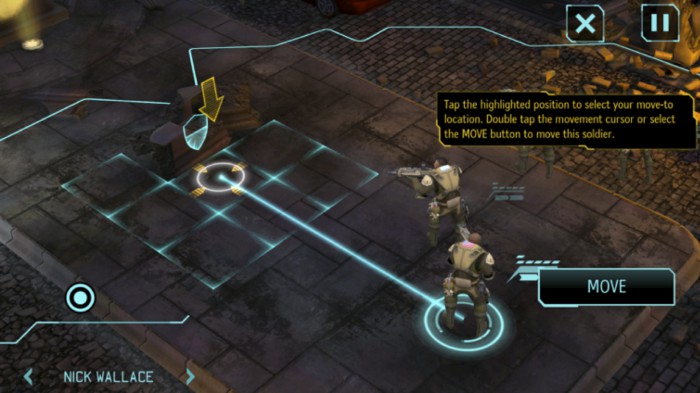 Visualization of options of action as movement paths in the game X-Com: Enemy Unknown.

These paths as well as icons and grid sections show the player’s possibilities of choice and highlight differences in the length of the paths, areas of influence of obstacles, antagonists or interactive elements which altogether alleviate the player’s choice.
In the case of SEW’s intra logistics application, users can manually select a route on request. The variable paths of movement are shown on top of the camera stream of the real production facility as part of the augmented reality interface.

Several excellent sources of inspiration for the visualization of complex, spatially arranged information can be found in games. One of the major challenges of the exhibit was to explain the new and very complex technology of autonomous guided vehicles (AGVs) in an intuitive and visually attractive manner. In this case not only the external appearance of the vehicle is of importance, but in particular the inner components like the drive or slewing ring which help to better understand the overall functionality of the vehicle. Looking for similar questions and approaches in the area of games, one will quickly identify a genre which perfected the presentation of vehicles and their inner workings: Racing games. 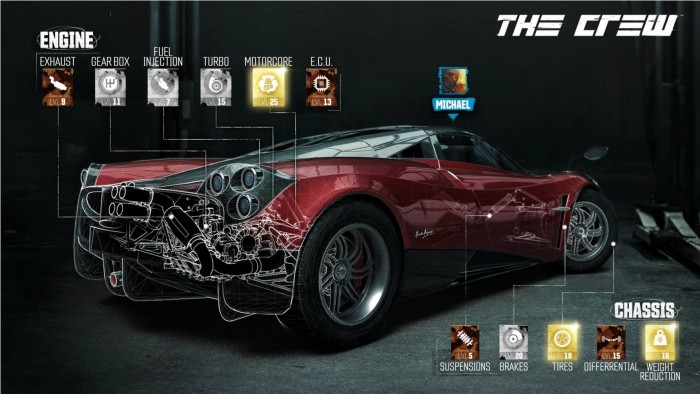 Transparent chassis view in the game The Crew

Apart from the action on the racetrack a large part of the interaction in racing games is about selecting and configuring your car. Next to choosing external configuration options like painting or decals, the selection of functional car components, which cannot be seen from the outside, are often of particular importance. Which tires do I select? Which brakes? And what kind of engine mount? An excellent car presentation can be found in the game The Crew from Ubisoft which visualizes car components not only in a well understandable but also in a very attractive way. Through the semi-transparent chassis the player can easily understand the position of the drive components, what size they are and how they look when animated.

Inspired by this form of presentation, SEW’s autonomous guided vehicle (AGV) was implemented in an attractive 3D real-time visualization which allows the user to switch between internal and external mounted components and to explore the correspondent position, scale and the dynamic motions through touch gestures. A dynamic camera panning highlights the position and allows a fluent transition between different camera perspectives.

In the end, an application was implemented which provides all relevant information through the user interface. If a problem occurs or the user needs more detailed information, the solution is just a few interaction steps away. Users receive a reduced workload through the automated adoption of process steps, but can ask for more information to prioritize orders, change carrying routes or find other ways to optimize the process.

This freedom of choice regarding the depth and frequency of interaction is analogous to what games often do: In most cases, strategy games are designed to be easy to learn, but still be challenging for experienced players.

In the game Starcraft II, the player can control almost every action via mouse clicks. If a player wants to be faster, keyboard shortcuts can be used to unleash powerful special abilities. These require more time-critical interactions of units by using their environment. Thereby, both beginners and experts feel cognitively demanded in an appropriate way: Everyone can choose the complexity of his approach. But there is also a major difference between our application and the game world: In the game a player can boost both efficiency as well as effectiveness if she masters the micro-management of her units. In our industrial application, machine intelligence ensures a basic level of efficiency and effectiveness. Nevertheless, a user can intervene if she wants to change priorities or if she wants to maintain a vehicle and needs to manually decouple it from an ongoing process.

The given examples show the potential of games as a great source of inspiration for designing intuitive and efficient user interfaces. Games are not the only source of inspiration out there, other application areas may generate good ideas, too. However, we are convinced that game developers already solved a lot of problems in a very efficient and motivating way and that a closer look at playful examples in terms of gamification often is worth one’s while.

The exhibit of SEW-EURODRIVE did not only make the Industry 4.0 tangible and perceptible through linking several state-of-the-art machines and control mechanisms but furthermore created an intuitive and future-oriented access to complex processes by incorporating playful interaction and augmented reality technology. Despite the risks of such a complex technological cooperation, SEW showed courage to bring this ambitious project to life and was rewarded with numerous enthusiastic visitors who allowed the exhibit not a moment of peace over the whole trade fair period. Eventually, we produced evidence: Gamification and Industry 4.0 are compatible. For this reason we are talking about “industrial gamification”.