The Number Seven Is Not Magical, but Cognitive Capacity Limitations Are Real and Relevant (Part 2) 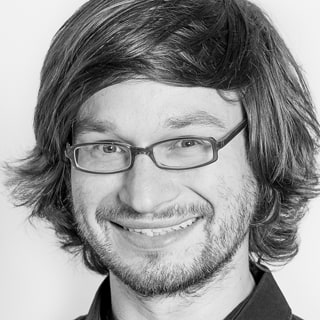 Part 1 of this article has pointed out that the false doctrine to restrict menu items, bullet points etc. to seven is based on a misreading of Miller (1956). Contemporary research shows that capacity limitations do indeed exist, but these are currently estimated to lie at about four items. Recently, as a reaction to the oversimplified propagation of the “magical number seven”, the opposite opinion has become increasingly popular: Its proponents argue that there actually is no reliable capacity limitation at all or that—if there is such a limitation—it is not relevant for UI design. If these critics were right, also the new “magical” number 4±1 would be of only minor importance for UI design. I argue that this position throws out the baby with the bath water; although it is advisable to be suspicious of magical numbers and other oversimplified rules, capacity limitations are a psychological fact and indeed relevant for UI design. As is often the case, the truth lies somewhere in the middle…

There is a rumor that research on working memory limitations is irrelevant for UI design, because everything of importance is right in front of the user’s eyes, and therefore the operation of UIs does not rely on memory functions at all. I will shortly introduce some arguments and lines of research here that strongly speak against this claim.
First, maintaining information in memory is necessary for using an UI whenever information relevant for the task at hand is scattered over several screens or when it is occluded by pop-ups. Although these situations should be avoided whenever possible (see Gócza, 2010; Rhodes, 1998), they are sometimes inevitable.
Second, working memory takes a rather central position in human cognition and thereby influences many aspects of life. For example, working memory capacity is strongly related to general intelligence (e.g., Kyllonen & Christal, 1990; Conway, Kane, & Engle, 2003). Those who score high on working memory tests also score high on intelligence tests. Working memory training can—under certain circumstances—apparently even increase intelligence (e.g., Jaeggi, Buschkuehl, Jonides, & Perrig, 2008). A long research tradition has shown that general intelligence in turn is predictive of such important aspects of life as educational and vocational success, health and even longevity, to name just a few. The much younger discipline of research on working memory capacity indicates a similar relation with these variables. Given this significance of working memory capacity; why should the use of UIs (which essentially is information processing) remain unaffected by this critical bottleneck in information processing?
Third, the limit might not actually lie in the amount of stored information, but in how many elements a person can attend to at once. If so, the number of elements that are visible on one screen (like menu items and bullet points) is relevant even when no information has to be maintained in memory. In line with this claim, similar capacity limitations as in working memory have been observed in a variety of tasks that on first sight are fully unrelated to memorizing information. Two of the most interesting from among these tasks are enumeration and multiple object tracking.
In the enumeration task, several randomly scattered objects are shown on the screen and participants are asked to estimate their number. In one version, these objects are shown for a very short time (usually < 1s) and the accuracy of estimations is measured. In another version the objects remain in sight and the time until participants give the correct response is measured. Estimates are fast and nearly perfect for small amounts of objects (about four; compare the three pictures below the paragraph to get an impression). When the number of objects increases above this subitizing range of about four objects, both time and error rate sharply increase (e.g., Cowan, 2001). As most humans can only subitize (i.e. immediately know the number of) such a very limited amount of objects, they are usually impressed when Rain Man (Johnson & Levinson, 1988) in a fraction of a second accurately counts the large number of toothpicks (246) his brother has thrown. 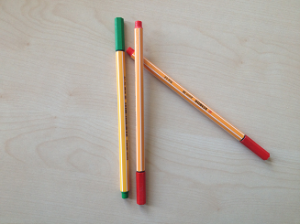 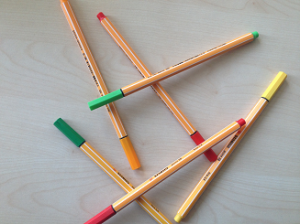 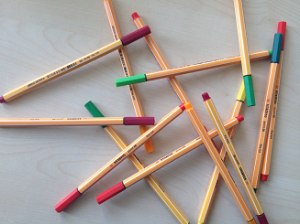 Another interesting task with a similar capacity limit is multiple object tracking. In this task several identical objects (e.g., white discs) move around on a computer screen for some duration. At the beginning of each trial some of these disks (the designated targets) are highlighted. After highlighting ends, targets are inseparable from the remaining discs (distractors) for the rest of the trial. All discs then start to move randomly and independently. Similar to the shell game (“Shell game,” 2012), participants have to focus attention to the targets and then to track their movement. After the movement ends, the task is to select the targets from among the indistinguishable discs.The typical maximum of targets people can successfully track usually lies around four (Cowan, Morey, & Chen, 2007; Scholl, 2009). Examples of the MOT task can be found here.
Results from the enumeration task and the multiple object tracking task have little direct implications for UI design (except for UIs for some special tasks as, e.g., air traffic control). In most cases users do not need to count objects fast and accurately or to track independently moving objects. However, these results indicate that the measured capacity limitations do not only apply to memory, but potentially to the even more general attentional functions that are, of course, also at play when using an UI.
Being able to attend to many elements in parallel is of critical importance when several elements must be processed together, that is when they must all be comprehended at a single moment in time. For example, when a value is manipulated via a slider control, the user has to attend to the slider that is moved and to the value that changes. This is necessary in order to be able to stop moving the slider as soon as the desired value is reached. Even more elements must be processed together if dependencies between the manipulated value and other values are relevant. To comprehend these dependencies, attention must be directed to all involved elements in parallel (see, e.g., the following video).

I have outlined that capacity limitations in information processing exist and that these are relevant for a broad variety of tasks. This invokes veritable horror scenarios: Must we now apply the even stronger restriction of a “magical” number four on items in a menu or in a bulleted list? Of course not! At least two recommendations for UI design in general can, however, be derived from the here reviewed research.
First, it surely is a bad idea to design a system that asks its user to hold more than four pieces of information in working memory. This is the case when information that is relevant for one task is distributed over several screens or covered via pop-ups. Such unfortunate design decisions often arise from poor requirement analyses. In particular designers are occasionally unaware of the relations between the respective elements or of the users’ need to comprehend these dependencies1. Memory capacity limitations also become problematic when the designer as an expert in a particular domain treats several pieces of information as one chunk that users who are no experts in the respective domain have to process separately. For example, the terms “high season” and “low season” in price tables are easy to unpack for the travel agent, but force the customer to keep the respective dates in working memory. Under such circumstances the designer experiences a much lower working memory load when using the UI than the actual user. Such mistakes will, however, come to light in properly planned usability test with representative users. If working memory load becomes too high, users will make many mistakes and complain about the overly complex system.
Second, concerning menus and lists, there are advantages to keeping the amount of displayed information as small as possible. This goal, however, often conflicts with the much more important goal of keeping the amount of necessary navigation and working memory load low by offering all task-relevant information on one screen and by keeping menu structures shallow (see Gócza, 2010; Rhodes, 1998). The critical difference to the first scenario is that there usually is no need to be aware of all menu items or bullet points at once. Exceeding the users’ capacity limits here only means that it will take a bit longer until they have found the relevant information or choice. What experimental psychology can contribute to easing and speeding up this search process will be the topic of a further blog entry following soon.

1Note that Chuck Norris has never committed this mistake.