Character design in the research project LOUISA – A friend, a good friend

In the previously published blog articles on the LOUISA project, we discussed the general objectives of the project and reported on the weighting of the player types within our target group. Since we wanted to motivate the young patients to use the LOUISA app with the help of a digital companion, we were now faced with the task of designing it.

In her last article, Britta talked about the results of the player type evaluation with patients of the pediatric clinic of the University Hospital Essen. These already indicated that a kind of mentor could be a good way to encourage children to use the app. The idea for this came up in advance when our project partners, health and pediatric nurse Carolin van Nahl and senior pediatrician Dr. med. Oliver Basu, thought about what could motivate the children to perform monotonous tasks over a longer period of time. The distribution of the player types in the direction of philanthropist supported the idea of a character who helps, but conversely is also dependent on the help of the patients.

Before we could start with the visual elaboration of the character, we had to clarify which rough direction we wanted to take in the design. It was already determined that the character would have a background story and that it would help the child use the app, but would also rely on the child’s support in doing so. What kind of character it would be, whether human, animal, robot, or something else entirely, remained to be seen. Dr. Felix Born, Entertainment Group Uni-Duisburg, who supported the LOUISA project team on the topic of gamification, helped us clarify this question. In a survey, he found that animal characters in particular triggered a great deal of sympathy among the children, as they inspire trust and curiosity and are quickly regarded as friends. In addition, being taken care of (in the form of pets) played a major role with them. The aspect of being there for each other is particularly important for the Philanthropist player type. We then narrowed down the selection to four animal-like Characters and prepared sketches for another survey to find out the final companion for the LOUISA app.

The animal-like Characters were to include some features that were important to the children. They were incorporated to varying degrees in the individual designs: 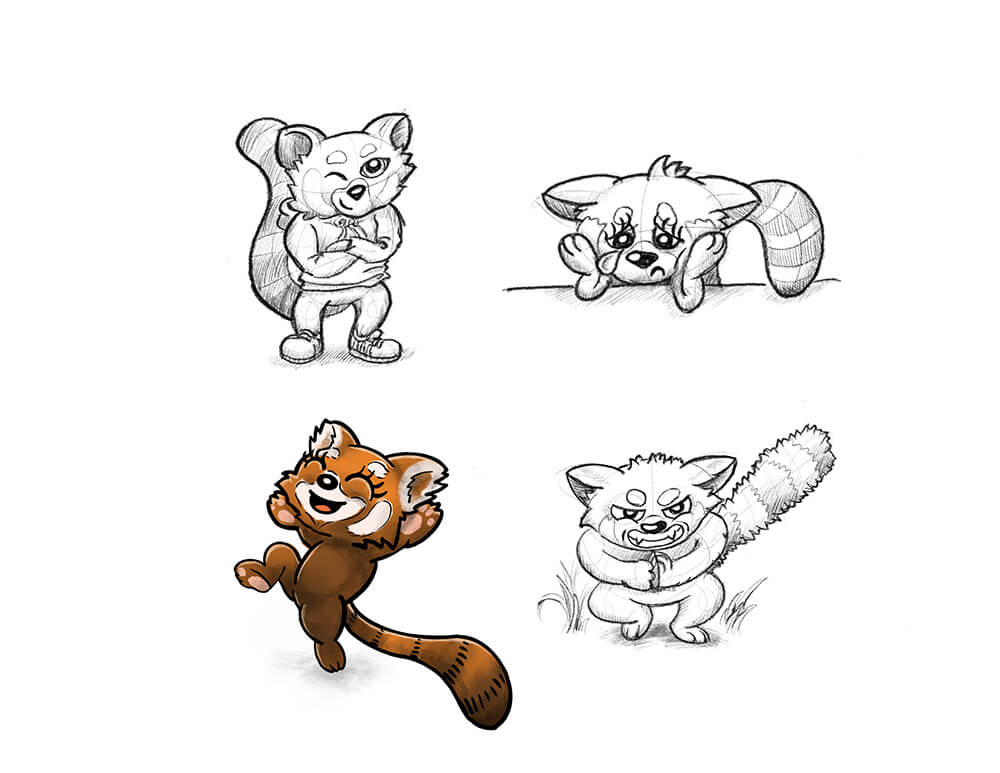 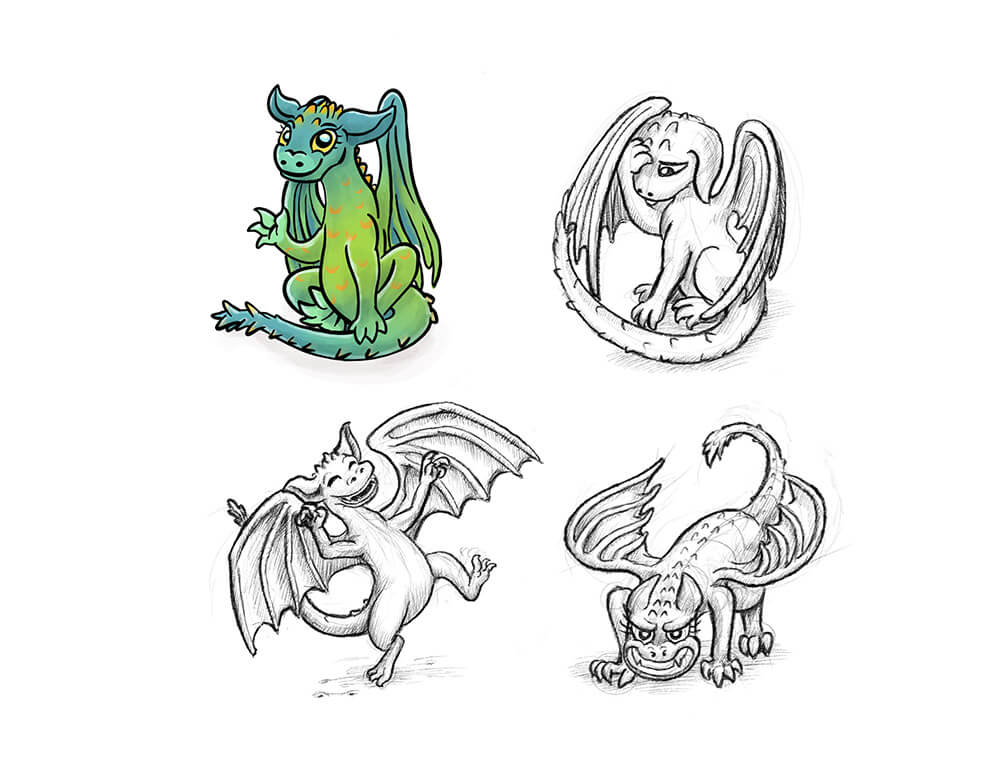 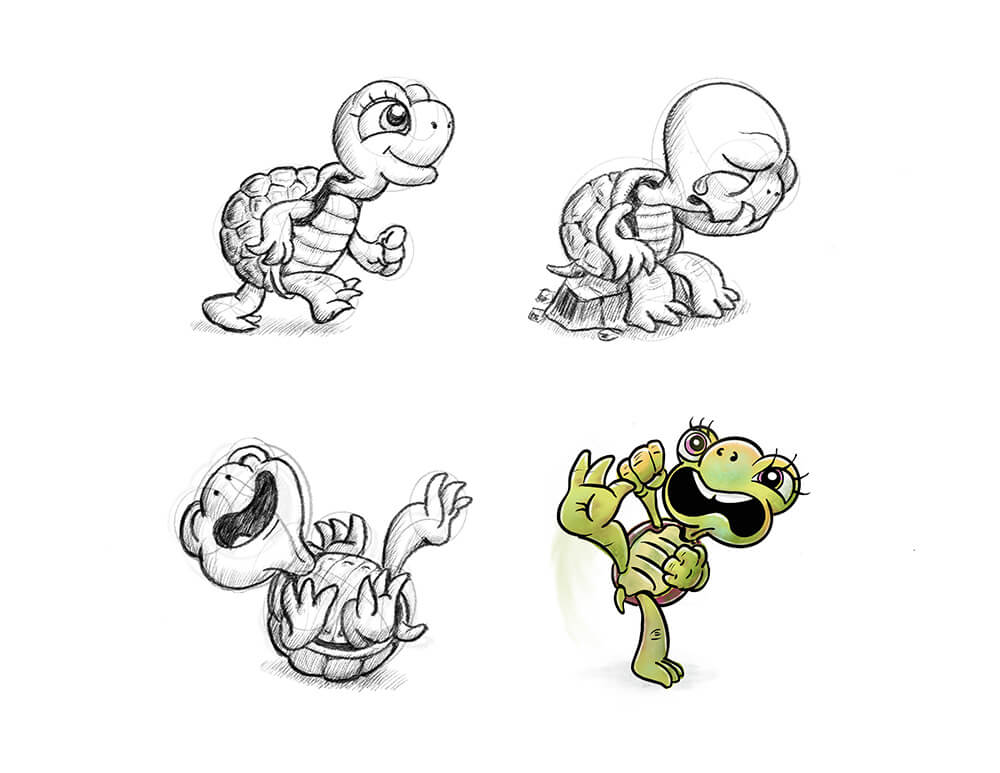 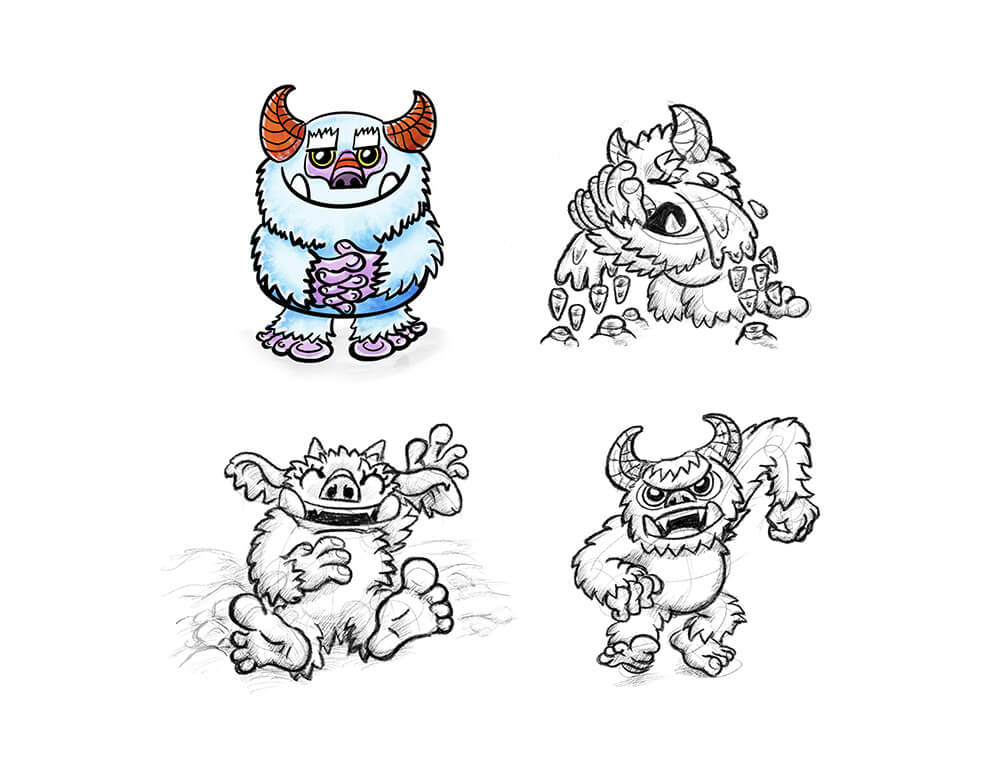 To make the designs more comparable and not just distinguishable by a single drawing, we depicted each character in four basic moods: neutral, happy, sad and angry. In addition, we always color-coded one scribble to make the representation more meaningful.

Fifty-nine young patients between the ages of 3 and 18 took part in the survey, and the gender distribution was very balanced, with 29 female and 30 male participants.

While we in the team had our very own favorites, namely the yeti and the turtle, the children opted for the red panda as a suitable animal for the app companion. The children liked him mainly because he is cute and sweet and spreads good humor. The panda was equally preferred by both genders, so we didn’t have to make any adjustments for gender-based preferences in the later elaboration. In second place was the dragon, which was also perceived as very cheerful, and also impressed with its ability to fly and breathe fire. The yeti put off many children with its fearsome appearance and received the lowest approval rating – an indication that physical strength was perceived as less important than a positive and approachable appearance. Interestingly, for the red panda, it didn’t matter exactly what kind of animal it was. It is not a well-known animal like a dog or a fox – or mythical creatures like the dragon or yeti – and accordingly was not as well recognized. However, this didn’t seem to matter that much, as the panda still received the most approval among the respondents. This gave us the idea that we could make the background story of the character a bit more imaginative and endow the character itself with magical abilities.

To make the magical origins of Louis – our nickname for the character – visible, we adapted the color scheme and added magical symbols to the fur pattern. These play an important role in the background story and gamification elements of the app and will be explained in more detail in one of the following blog articles. First, we chose a color scheme that is relatively gender-neutral to continue to achieve the broadest possible acceptance among patients. 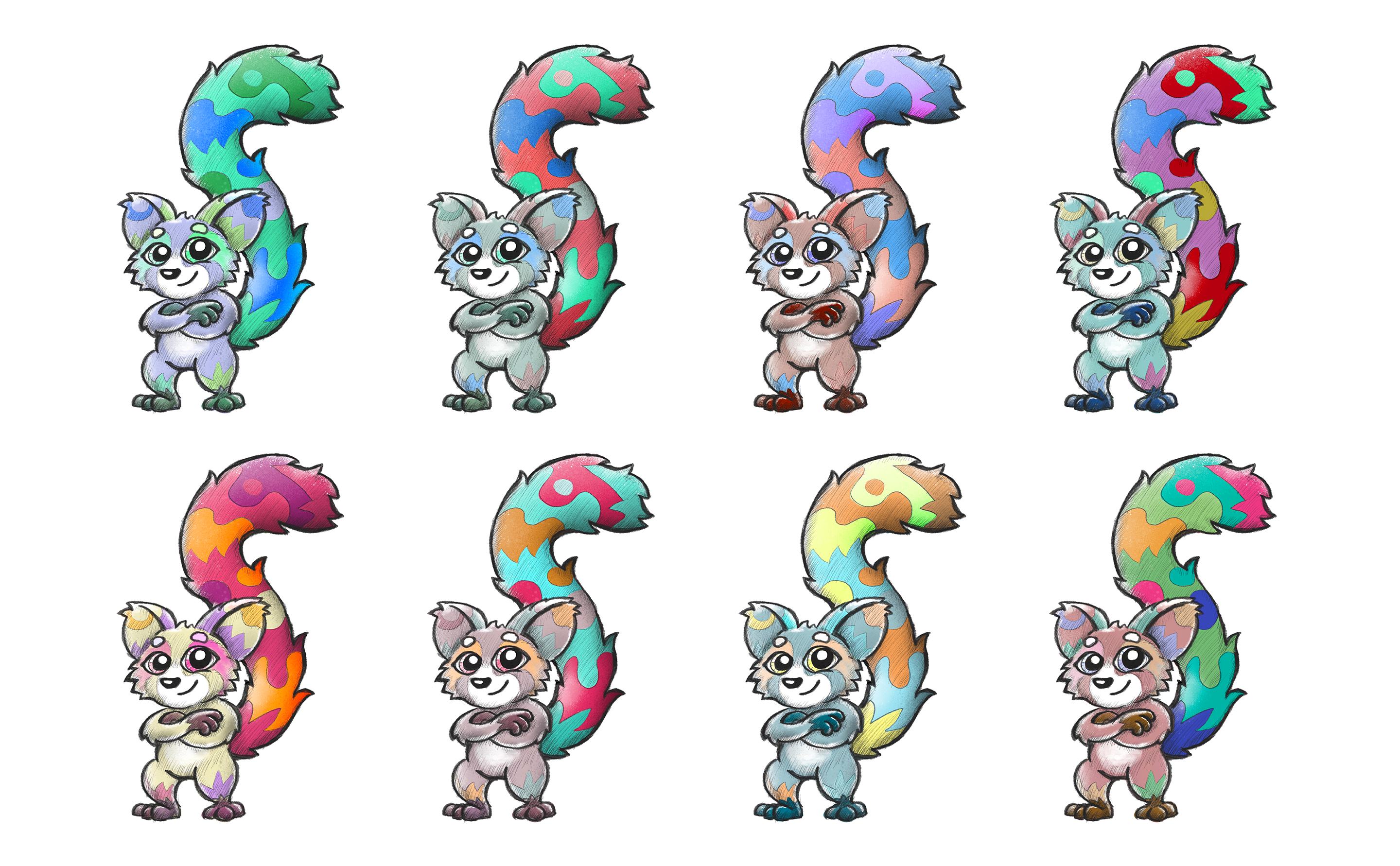 Only after we had agreed on a scheme, we created the first detailed elaboration in vector format. We already divided this into several individual parts, i.e. head, torso, upper arm, forearm, paw, etc., so that we could later design further poses as quickly and flexibly as possible and, if necessary, make Louis moveable using 2D puppet animation. 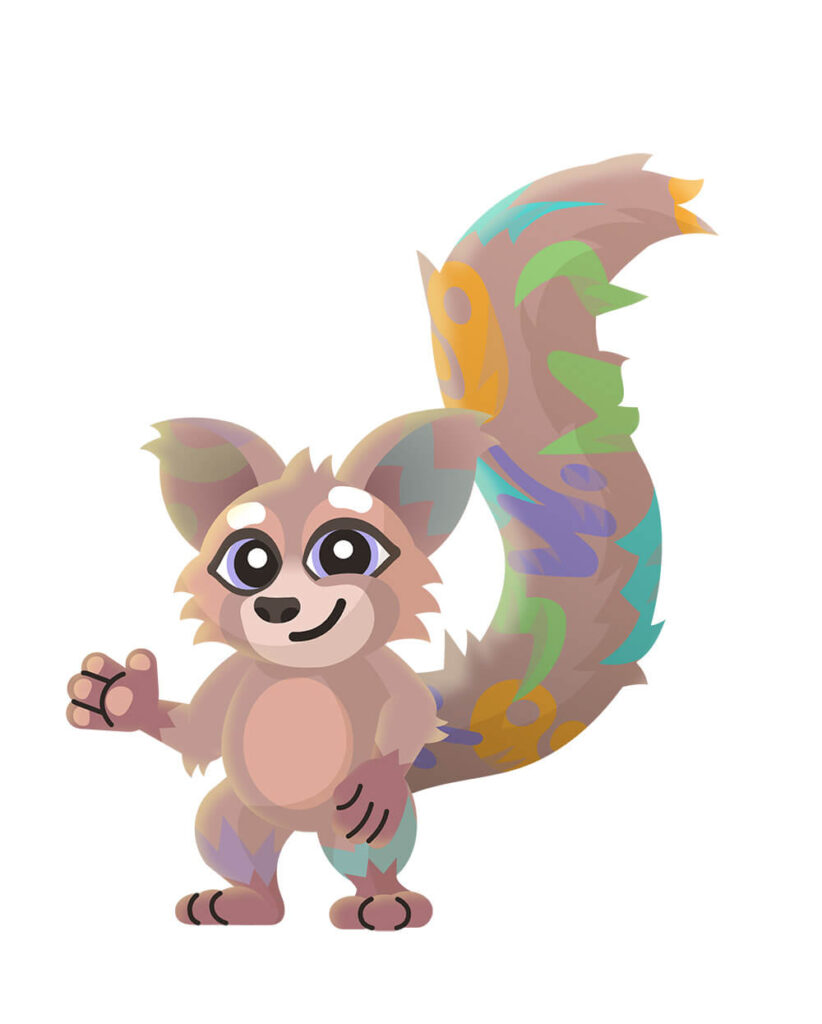 Of course, a bond between the young patients and Louis is only possible if the latter, as in the case of the scribbles, has different emotions instead of simply standing by as a neutral advisor. Accordingly, in addition to the smiling facial expression, we have added others so that Louis can react appropriately when communicating with the app user. 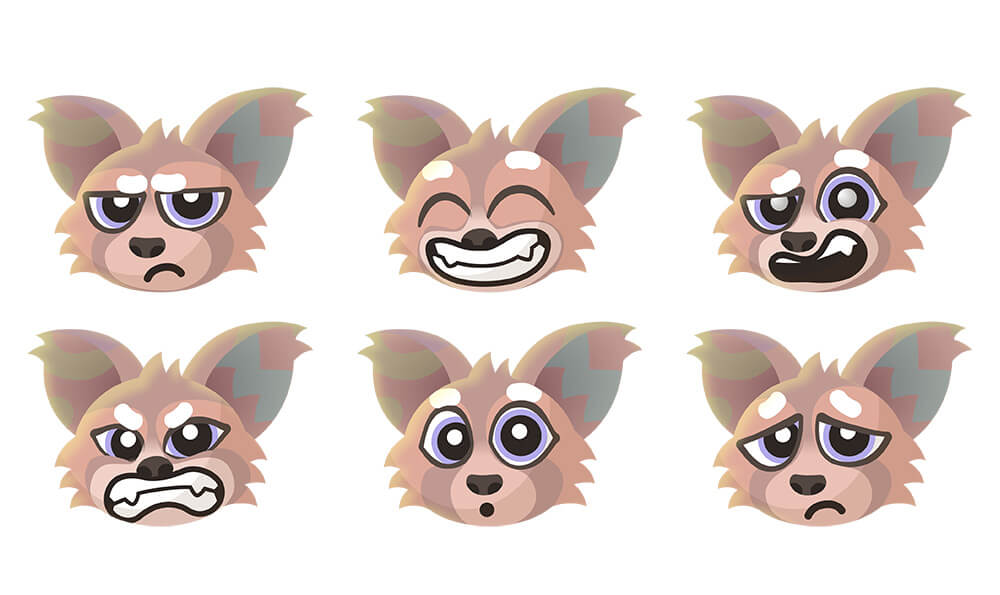 As indicated above, in the next blog article we will deal with the development of a background story for the character, with which we could incorporate further gamification aspects into the concept.