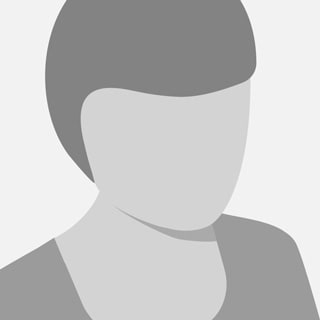 2015 was an important year for smartwatches. Following the release of the Apple Watch in April sales figures for wearables increased strongly (see: IDC). It seems obvious that smartwatches, at least in the consumer market, are on the rise – but what added value do users see in a smartwatch, and in which everyday situations can they benefit from them? Is it even possible to use them in an industrial context? 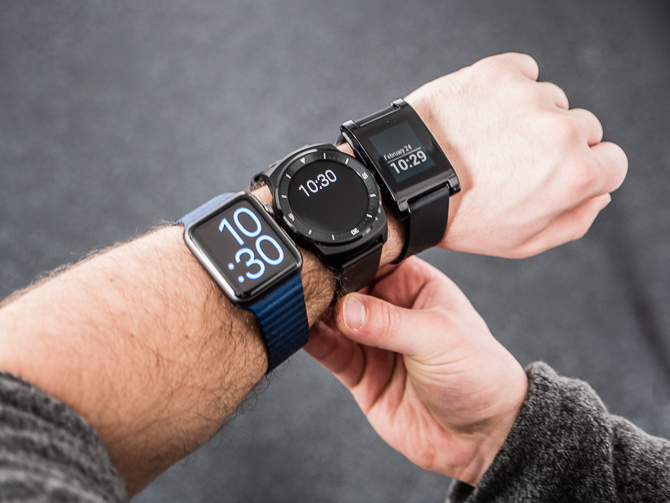 Compared to smartphones or tablets sales figures are still modest, indicating that end users don’t really know yet, wether they need a device like this. The small touch screen limits interaction and restricts usage, making it impossible to replace your smartphone with a smartwatch. That’s why it seems very important to optimize the user’s experience with the small device to enable meaningful application. But primarily, a suitable use case has to be found for the smartwatch.

It might sound surprising but Industry 4.0 could very well become one of those meaningful use cases. It has arrived in most of the big player enterprises, and the advancing interconnectedness of machines and overall use of new technology is offering a lot of possibilities to optimize and simplify production processes. With WatchOut we wanted to explore the potential a smartwatch can have in exactly this field. The goal was to develop an application that would support the user in his work instead of impeding it, and thereby offering a real added value and benefit to the user in the industrial context.

Nothing happens without a reason

As a computer scientist specializing in media with a passion for new technologies and the Internet of Things I wanted to delve into the topic of smartwatches and their possibilities immediately. So I was quite over the moon when, at the beginning of last year, I was offered to do exactly that at Centigrade – within the scope of my practical semester for the university. During my internship I worked with different smartwatches and developed applications for them. In the end I ran through a complete project cycle: from the idea to a concept and then to a usable prototype.

Right from the start our goal was not to “only” develop an application for a smartwatch. In fact, we rather wanted to examine the potential smartwatches can have and infer design patterns regarding UX design. Form soon turned out to be an interesting factor here, so we evaluated round and rectangular displays. On the one hand a round smartwatch feels normal due to the traditional form of a watch. On the other hand a round screen is very unusual. Exactly this novelty made us go with the round smartwatch to optimize interaction for this unconventional display. 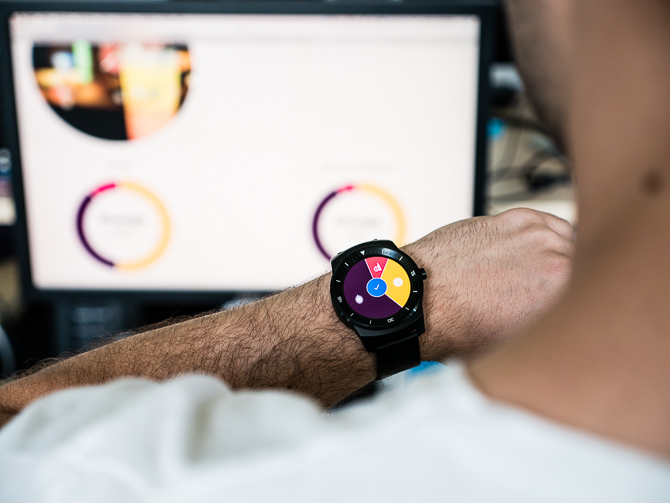 During our first brain storming concerning possible use cases, one unique feature of a smartwatch unraveled itself very quickly: accessing notifications without using your hands to do so. A mere raise of the arm is needed to read a notification and decide upon its relevance and corresponding reaction to it. This form of hands-free interaction has the big advantage of not having to dig into your pocket to get out your smartphone. We realized that this could be a huge advantage to users in the industrial area, enabling them to be aware of context information in situations where they have their hands full. This applies to a technician monitoring and repairing several machines in a production site, carrying a toolbox and laptop everywhere in the facility.

Watch out! So here is what we did…

An essential part of our idea depended on our partner ITQ, who recently had completed a student project called MI5, which offered some connecting factors to our planned smartwatch project. Simply put, MI5 is a machine that produces cocktails and works with several intelligent modules that communicate with each other, making it an example of Industry 4.0. This is where we came in. We wanted to display automated notifications and warnings from the MI5 machine on the smartwatch. Additionally it was supposed to be possible to react to such an event and take direct action to manipulate the production process.

Who would want a bad drink?

The next step was to turn this idea into a concrete use case. The trivial yet promising question of “who would want a bad drink?” helped us immensely to solve this problem. Of course, nobody wants an unsatisfactory cocktail, so this became the context of our application, the key scenario being a negative (or rather not quite satisfactory) feedback to a drink just produced with the MI5. In consequence the waiter operating the MI5 should be informed on the feedback via push notification on his smartwatch and have the possibility to change the composition of the cocktail immediately. 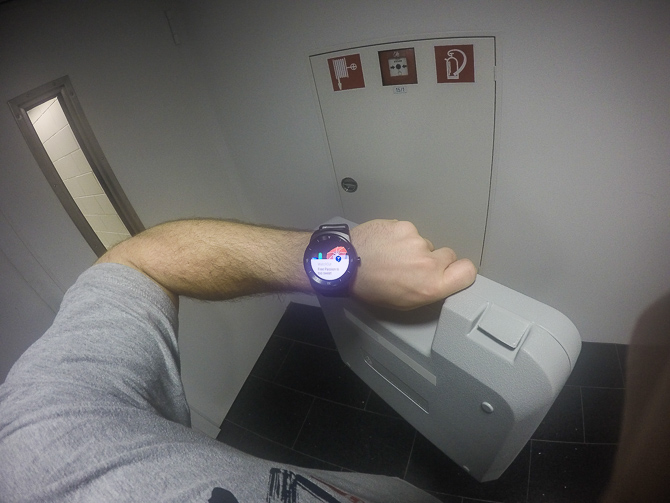 Building on this idea we first developed an app enabling users to rate a cocktails’ taste. The results of these ratings are communicated to the MI5 cloud server, which then transfers negative assessments to the smartwatch. The app was realized in form of a smartphone app, with which users can scan their drinks’ barcodes, and then judge the quality of their individual cocktail. 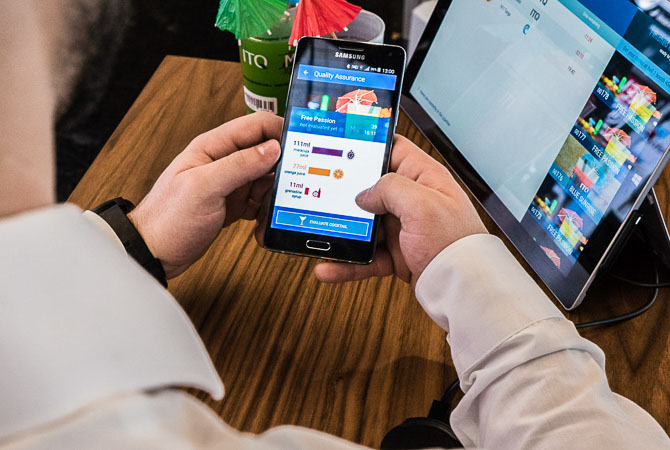 Still, for us the quintessence of the project was the application of the smartwatch. Bearing in mind the goal to utilize the round design of the device and optimize interaction we brainstormed for ideas again. The result was a new, round interaction gesture and corresponding UI control for accurate input of parameters on the watch. In our use case these parameters of course represent the mixing ratio of the cocktail’s ingredients.

By using this UI control in the smartwatch app one can now remotely manipulate the mixing ratio of an unsatisfactorily rated cocktail via the watch without having to interact with the MI5 directly and without a delay. The app can be opened from the notification and shows the mixing ratio of the individual cocktail. The following video demonstrates the interaction with the smartwatch.

During the Kompetenztag Engineering in July 2015 in Munich – an exhibition about Industry 4.0 held by our partner ITQ – we were able to test the smartwatch app for the first time. Also I met our project partners face to face for the first time after already having worked together remotely over the last couple of months. For all the nervousness about how well the watch and the machine would communicate in a real-life situation everything went very smoothly and successfully. The feedback for the demonstration was great which of course encouraged us to move on with the project – iterating the UI control without losing its simplicity. Our first priority remained not to overload the small devices’ interface so as not to jeopardize its sensible usage.

In November 2015 it was showtime for WatchOut at the SPS IPC Drives trade show in Nürnberg, where both ITQ and Centigrade were exhibitors. For this occasion we took the project further: we wanted to enable SPS visitors to fully experience MI5 and WatchOut. We developed a separate web interface to trigger the production of a cocktail by MI5 via the cloud. This made it possible that visitors at our booth could order a drink using their smartphone by scanning a QR code – and pick it up at ITQs’ booth. To avoid making the visitors stand in queue for their cocktail we displayed the number of orders in progress and how long each would take. 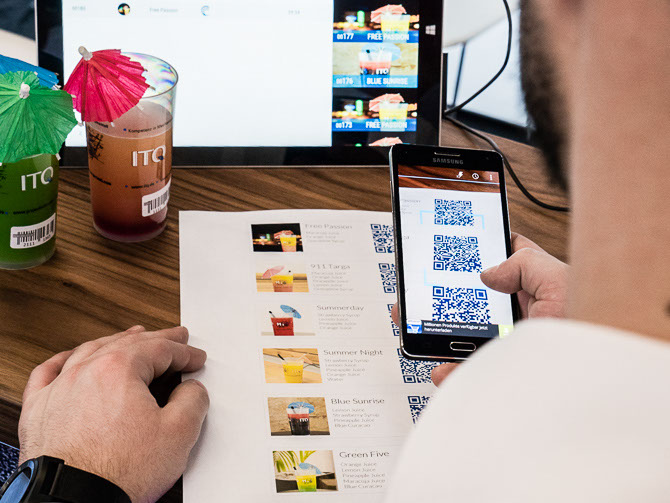 “It all turned out great in the end” – this is what summarizes our last week before the event quite nicely. Our test run exactly seven days before the exhibition did not go as well as expected. Short notice changes had led to some problems in the process. But we and our partner ITQ persevered and nailed it in the end. And could drive towards Nürnberg with a good feeling and thirst for drinks.

Smartwatches and Industry 4.0 – made for each other

Just like at the ITK Kompetenztag the project was an enormous success on the SPS. Even former critics were impressed and convinced by the natural simplicity of interacting with the smartwatch.

I myself am very pleased how everything turned out, too. Both the course of the project and the result are awesome, and the usability of the smartwatch application is absolutely wonderful.

Also, we are now quite sure about the unique advantages of smartwatches in an Industry 4.0 context: users can be aware of and react to emergencies location-independently and on the spot. Even better: they don’t even need to have a hand free or dig their smartphone from their pocket.